AAP's Bhagwant Mann: 'I will take oath in Bhagat Singh's village Khatkar kalan, not at the Raj Bhawan'

Bhagwant Mann announced that he would take oath as the Chief Minister not in Raj Bhavan, but in Khatkar Kalan, the native village of Shaheed Bhagat Singh. 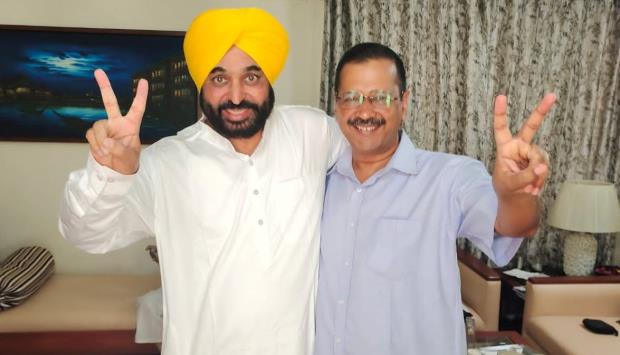 Punjab Election Results: AAP's chief ministerial face Bhagwant Mann said, "No government office in Punjab will have the chief minister's picture, all offices will have Shaheed-e-Azam Bhagat Singh and Babasaheb Ambedkar's picture."
Punjab Election Results: Aam Aadmi Party (AAP) is on the way to a historic victory in Punjab. Gazed by the victory, party's chief ministerial candidate Bhagwant Mann addressed party workers and supporters at his residence in Sangrur on Thursday.
During this, Bhagwant Mann announced that he would take oath as the Chief Minister not in Raj Bhavan, but in Khatkar Kalan, the native village of Shaheed Bhagat Singh.
"Photos of Bhagat Singh and Ambedkar will be installed in government offices, not of CM"
Bhagwant Mann, seen as the future Chief Minister of Punjab, also announced in his victory speech that the Chief Minister's photo will no longer be displayed in government offices in the state.
He said that instead of this, photographs of Shaheed Bhagat Singh and Babasaheb Ambedkar would be installed in all government offices of Punjab.
Shaheed Bhagat Singh's village- Khatkar Kalan
Bhagat Singh was born in Banga village of Punjab, part of Pakistan. Although his ancestral home is in Khatkar Kalan village, which comes in Shaheed Bhagat Singh Nagar district (Nawanshahr) of Punjab.
According to a report, Bhagat Singh's mother lived in the same ancestral house in Khatkar Kalan till 1975. However, after his death, his family members have left from there.
Bhagat Singh's childhood was spent in Khatkar Kalan. His ancestral house has been protected by the government as a national heritage.
Also Read: Archana Puran Singh trends on social media, following Sidhu's defeat
Bhagwant Mann won by 58,000 votes
Bhagwant Mann was in the fray from Dhuri assembly seat in Punjab, where he won by defeating Congress candidate by a margin of 58,206 votes. On the other hand, the incumbent Chief Minister of Punjab Charanjit Singh Channi is trailing in both his assembly seats.

AAP ahead in 91 seats in Punjab
According to the data available on the official website of the Election Commission, Aam Aadmi Party was leading in 91 seats in 117 assemblies of Punjab till 3:00 PM. At the same time, the ruling party Congress was seeing a lead in only 19 seats. Talking about other parties, Shiromani Akali Dal was leading on 3 seats, Bahujan Samaj Party on 1 seat and Bharatiya Janata Party on 2 seats. While one seat has gone to the independent's account.
Bhagat Singh once said if we don't change the system after the British leave, nothing will happen. Sadly in last 75 yrs, these parties & leaders had the same British system, they were looting the country, no schools/hospitals were made. AAP has changed the system: Arvind Kejriwal.