Raghav Chadha also spoke on the concept of Love Jihad and called the issue 'non-sense' created by the BJP for the vote bank politics. 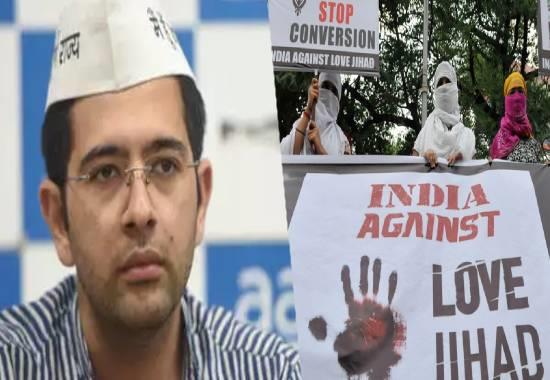 Aam Aadmi Party (AAP) Rajya Sabha MP Raghav Chadha in his latest potshots at the BJP spoke on the concept of 'love-jihad' and rubbished that such things actually exist in the society. In an interview for a YouTube channel, 'UNFILTERED by Samdish', AAP Rajya Sabha MP Raghav Chadha spoke on various issues and even called the BJP 'a party of goons and illiterate'. Chadha also spoke on the concept of Love Jihad and called the issue 'non-sense' created by the BJP for the vote bank politics.
On being asked in the rapid-fire round on the issue of Love Jihad, Raghav Chadha said, "It's all nonsense spread by the BJP. I personally feel love jihad is raised by the BJP people just to further their vote bank politics and to polarise the society. These are all BJP-made issues."
Various BJP-ruled states have vouched for strict anti-conversion law or love Jihad law. Earlier this year, the governments of Uttar Pradesh, Gujarat, and Madhya Pradesh approved legislation designed to prevent religious conversions by deception or other dubious ways, such as matrimony. Not only this, during the recently concluded UP Elections, BJP's manifesto had announced that those found in acts of love-jihad, will be put behind bars for 10 years, and also a fine of Rs 1 lakh will be imposed.
Also Read: 'BJP is the party of illiterate & goons, patronize criminals': AAP's Raghav Chadha rakes up row
Raghav Chadha speaks on dialogue with Pakistan
While disagreeing with the 'BJP-way' on most of the topics, Raghav Chadha stood behind the Centre's decision to suspend any kind of dialogue with Pakistan. " On issues like external affairs, national security, dialogue with Pakistan; we stand with the government of India. Our stand is the same as the Centre."
Read Raghav Chadha's full interview here