A day after Chief Ministers raised price uniformity of the vaccine to be administered from May 1, the health ministry has issued clarification on the issue.

"It is clarified that the Govt of India's procurement price for both #COVID19 vaccines remains at Rs 150 per dose. GOI procured doses will continue to be provided TOTALLY FREE to States," said a tweet by the Health Ministry. 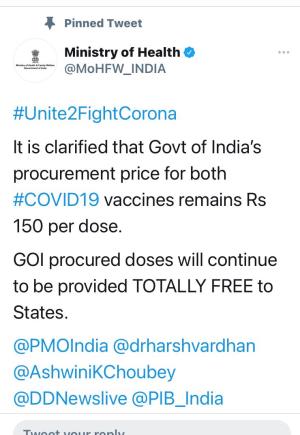 Many Chief Ministers have written to the Prime Minister and Congress interim President Sonia Gandhi had also written to PM Modi expressing concern over different pricing for vaccines.

Chhattisgarh Chief Minister Bhupesh Baghel in a meeting with the Prime Minister had urged that vaccines to states should be given at the rates of the Centre.

"Provide vaccine availability action plan to the states for operating vaccination campaign for the age group above 18 years soon. Producing states should not obstruct supply of life saving medicines," Baghel had said which is mentioned in the statement issued by the state government.