Prime Minister Narendra Modi said on Tuesday that Aligarh, which was known to manufacture locks for securing houses, will now play an important role in securing the country's borders. 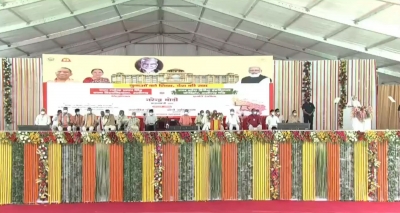 Prime Minister Narendra Modi said on Tuesday that Aligarh, which was known to manufacture locks for securing houses, will now play an important role in securing the country's borders.

"India will not only become self-reliant in defence matters but will also become a major exporter in this sector," he said.

The Prime Minister who also laid the foundation stone for the Raja Mahendra Pratap Singh state university said that the university will focus on modern education and emerge as a hub for defence studies and defence research.

Talking about Raja Mahendra Pratap Singh, the Prime Minister said that he was a freedom fighter who had been forgotten by the previous governments.

"Every youth who has dreams should know about Raja Mahendra Pratap Singh and can learn from his life. Today, we are trying to acquaint the new generation with these icons even as the country celebrates Amrit Mahotsav," he said.

The Prime Minister said that the defence node in Aligarh and the Raja Mahendra Pratap Singh university would transform western Uttar Pradesh soon.

Lauding the Yogi Adityanath government for creating a new work culture and acting as a catalyst for development, the Prime Minister said that the chief minister had given a new face to Uttar Pradesh which was earlier known only for corruption and scams.

Recalling an anecdote from his childhood, the Prime Minister said that a Muslim man would visit his village every three months to sell locks from Aligarh.

"As a child, I knew about Aligarh because of the locks and about Sitapur because everyone used to go to Sitapur for eye treatment. Today Aligarh is poised to make a name in a much larger field," he said.

The Prime Minister also remembered former chief minister late Kalyan Singh and said that his absence was being deeply felt.

Earlier, the Prime Minister viewed the models of the proposed defence node and the state university.

The university is being established by the state government in memory and honour of the great freedom fighter, educationist and social reformer, Raja Mahendra Pratap Singh.

Also Read: Indians may get US Green card soon just by paying a Super fee

The university will be set up in a total area of over 92 acres in the Lodha village and Musepur Kareem Jarouli village of Aligarh's Kol tehsil.

The university will provide affiliation to 395 colleges of the Aligarh Division.