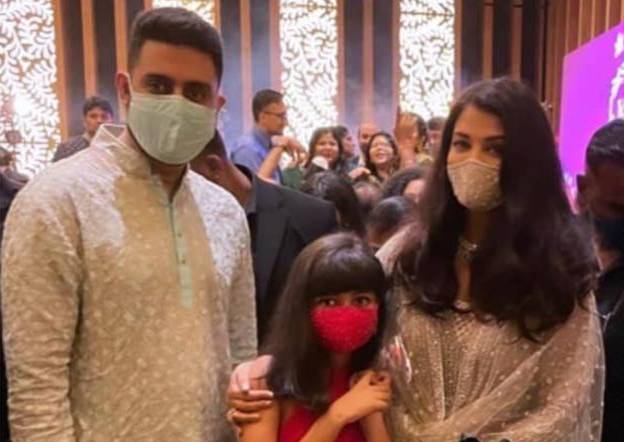 In a new video that is going viral on the internet, Aaradhya is seen matching steps with her famous actor parents, Aishwarya Rai Bachchan and Abhishek Bachchan. The little girl is seen dancing with them on the popular song ‘Desi Girl’ from Dostana which stars Abhishek in lead.

The pictures started surfacing on Monday, where the trio have attended Aishwarya's cousin's wedding and the internet is flooding with the video clip. The three are dressed in traditional outfits and coordinated each other in beige and embroidered ensembles, while little Aaradhya looked lovely in a red ethnic outfit. The wedding seems to be strictly following the COVID-19 as the three sported the masks in the picture.

In the viral video, the three of them are on stage and dance gracefully doing the signature steps of the song and minutes later, Aishwarya lovingly hugs her daughter. Particularly noteworthy was Aaradhya's delicate thumkas.

Meanwhile, Abhishek Bachchan has been roped in Yami Gautam and Nimrat Kaur starrer social comedy titled, Dasvi, to be produced by Dinesh Vijan, Sandeep Leyzell and Shobhana Yadav. Abhishek has also started shooting for director Sujoy Ghosh-backed thriller Bob Biswas and The Big Bull, inspired by the life of stockbroker Harshad Mehta. Abhishek was last seen in Anurag Basu’s multi starrer Ludo which is available on Netflix which has received huge praises from critics and audience.