Ajay Devgn looks extremely hot in a salt-and-pepper beard and slicked back hair. A picture of him is going viral on social media. 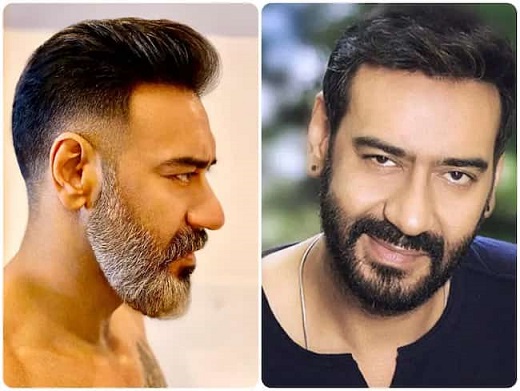 Bollywood actor Ajay Devgn is creating panic on social media due to his new look. In the photo, Ajay is seen in a very changed style. Ajay Devgn’s new grizzled and bearded look for his upcoming film Thank God has impressed his fans and colleagues alike. An earlier glimpse at the look had gone viral after a few photos surfaced on social media sites.

Styled by renowned celebrity hairstylist Aalim Hakim, the look has Devgn sporting a salt-and-pepper beard and slicked back hair.

Ajay’s new look got a stamp of approval from Anil Kapoor, Abhishek Bachchan and Kartik Aaryan, who dropped emojis on the photos. Maniesh Paul wrote, “Wow.”

Renowned Hair Stylist, Aalim Hakim shared two identical photos on his Instagram and Twitter profile, one colour and one monochrome. He captioned the post, “Deadly Devgn sports a Dapper look @ajaydevgn Did this new haircut & beard for our one & only @ajaydevgn.”

Ajay is fully booked for few years because many of his films are going to come one after the other. ”'Thank God', 'Mayday', 'Chanakya', 'Kaithi', 'Singham 3' and 'Golmaal 5'are some of his upcoming projects. Meanwhile Ajay Devgn is also going to make a digital debut with 'Rudra' web series.

Ajay Devgn’s period drama war film Bhuj: The Pride Of India is one of the most awaited films of the year. A source close to the production team of Ajay Devgn’s film said, “Bhuj is replete with many heavy-duty action sequences which are mounted on an unbelievable scale. Every sequence had to be seen as a micro project in itself. The making of these sequences has cost the makers a bomb of sorts. So, largely the film was divided into these units which were later strung together to make the film that Bhuj: The Pride Of India.