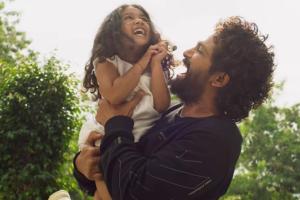 Allu Arjun on Thursday took to Twitter to proudly announce his daughter Allu Arha's acting debut in Tollywood. She will play the role of Prince Bharat in Samantha's upcoming film, Shakuntalam.

In a post, Arjun announced that Arha will be the fourth-generation actor from their family. He was overwhelmed with joy to witness his daughter carry on the cinematic legacy of his grandfather and great grandfather.

He wrote on Instagram, "A proud moment for the Allu family to announce that the fourth generation, #AlluArha will be making her debut with #Shakuntalam movie. I want to thank @gunasekhar1 garu & @neelima_guna garu for giving my daughter this beautiful movie as her debut and. I had an altogether different journey with @samantharuthprabhuoffl and am happy to watch Arha debut with her movie. My best wishes to the entire Cast & Crew of #Shakuntalam"

Also read: Hrithik Roshan on ‘ZNMD’ completing a decade, says he found himself in the process

Allu Arha is just four years old and is already a star on social media. His father Allu Arjun and mother Allu Sneha Reddy often share adorable photos and videos of the little one. Of late, Arha can be seen doing a lot of photoshoots and now she has found a perfect launchpad for her career.

Talking about Shakuntalam, the motion poster of the film was unveiled in January this year. Samantha Ruth Prabhu has several times shared pictures of herself from the sets of Shakuntalam on her Instagram stories. The film also stars Aditi Balan and Malhottra Shivam.