Today, on the occasion of World Environment Day people are celebrating the day by planting the trees and are contributing their bit to the environment.

On Saturday, Bollywood superstar Anil Kapoor has planted a tree near his residence and got engaged with a tree plantation campaign. 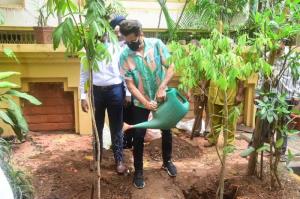 In the pictures, Anil Kapoor is seen planting a tree after ploughing the ground. He was also captured watering the plants.

Anil became a part of BMC’s Mega Vriksha Campaign, after becoming a parent to one of the plant sapling. After Anil Kapoor was asked about how does he feels about the initiative he said, “All it takes is small steps to come forward and raise importance.”

His upcoming projects are ‘Jug Jug Jeeyo”, which would feature Neetu Kapoor, Varun Dhawan, Kiara Advani, and “Takht”, which would include Ranveer Singh, Vicky Kaushal and Alia Bhatt.