Annabelle Sethupathi Movie Review: A Horror-Comedy but misses out on both

The much-awaited film that stars Vijay Sethupathi and Taapsee Pannu has not been receiving good reviews as per the critics. 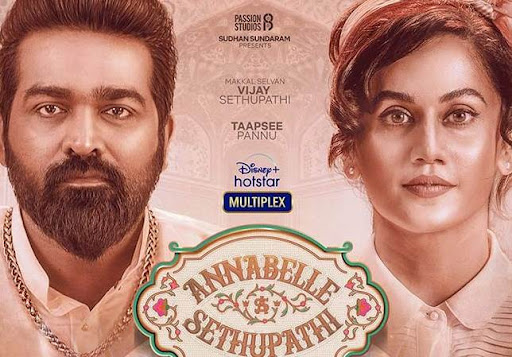 The movie had been in the limelight for its cast and was much awaited. Even though the movie is talked about a lot, it evokes curiosity just to later land the viewer in disappointment.
The film was all set to release in the theatres for a big release but had to be released on the OTT platform due to various reasons. The film is currently streaming on Disney + Hotstar.
The movie unfolds with a family consisting of three members who come to visit a place and decide to stay there. The family, aware of the fact that the presence of ghosts is there in the area chose to live there for the sake of it.
While they were to stay there, the family assigned another family to clean the house. While cleaning the house, Taapsee Pannu, who plays the role of Rudra in the movie gets reminded of her past life.
In her past life, Rudra was a princess and belonged to a royal family. While the story unfolds in an interesting manner, the film claims to be a horror-comedy but is neither funny nor scary.
Also read: Know Why Priyanka Chopra Had To APOLOGISE For Her Participation In ‘The Activist' Show
It sure has some scary as well as funny elements but on the whole, it will manage to keep you entertained and is not a full disappointment.