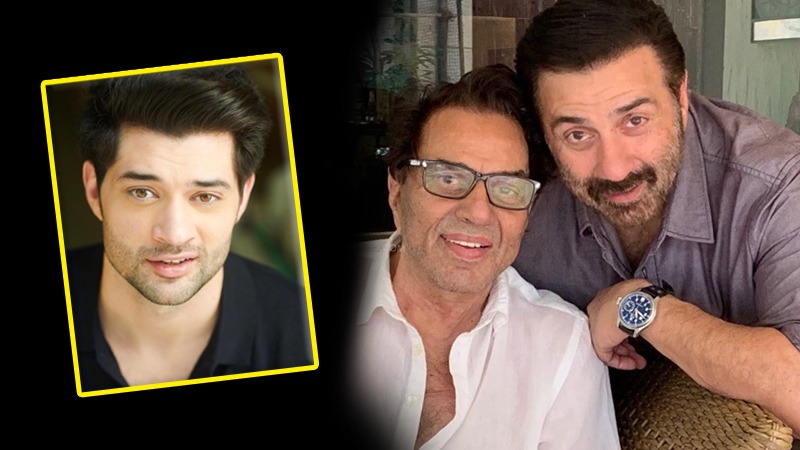 Sunny Deol’s younger son Rajveer Deol is all set to make his acting debut and the family is super excited to launch one more Deol to the ground. Soon to be an actor, Rajveer signed Rajshri Productions' upcoming movie based on the love and relationships of today’s world. The title as well as the female lead for the movie is yet to be decided.

This movie creates more curiosity not just because it’s a Deol debut but because a directorial debut too. Sooraj R. Barjatya’s son Avinash S. Barjatya is making his debut as a director and also he is the one who shaped the script.

Announcing his grandson’s debut Dharmendra wrote on Twitter, “introducing my grandson #RajveerDeol to the world of cinema along with #Avinashbarjatya directional debut. I humbly request you all to shower the same love and affection on both the kids as you have on me. Good luck and God bless #Rajshrifilms #barjatyas #Deols #RajveerDeol.” The debut director Avinash shared why he feels that Rajveer has the young spark of acting and said, “ he speaks with his eyes. He has a silent charisma and is tremendously hard-working. The more time we spent talking about the project, the more I began to see Rajveer as the protagonist in my film.” 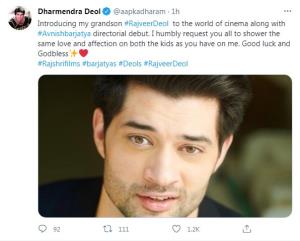 Also read: All you need to know about Punjabi singer Diljaan

Rajveer has worked as an assistant director and for that, he studied theatre in the UK. Under the guidance of theatre and film director Feroz Abbas Khan learned the essence of acting.

Even the Deol brothers Sunny Deol and Bobby Deol shared the announcement on their Twitter handles. “My son Rajveer starts his journey as an actor. Rajshri Productions proudly announces the collaboration of Rajveer Deol and Avinash Barjatya is a coming-of-age love story. A  beautiful journey awaits ahead.” Sunny Deol tweeted. Rajveer’s uncle Bobby Deol also announced how his nephew is about to live his dream and wishes him for the beautiful journey that awaits ahead.

Where younger is pulling up socks for the debut, the elder one is moving forward to his second release Apne 2.