Anupam Kher, who recently amazed audience with his turn in Vivek Agnihotri's 'The Kashmir Files' was questioned by a journalist regarding his planned trip to Varanasi on Twitter. 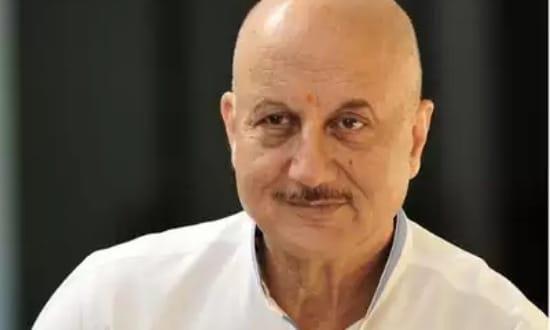 Anupam Kher, who recently amazed the audience with his turn in Vivek Agnihotri's 'The Kashmir Files' was questioned by a journalist regarding his planned trip to Varanasi on Twitter. A lot of criticism was heaped up on the movie for its false portrayal of events that took place from 1988-to 1991 in Kashmir. The movie shows the Muslim community in a brutal light and was hence called out for being segregated and being a propaganda movie. The movie had box office success, nonetheless.
The veteran actor's tweet informed his followers that he would be going to Varanasi to pay homage to the souls lost in the Kashmiri Pandit genocide. He added that he would do it through 'Tripandi Shraadh Pooja'. A journalist by the name of Rajesh Sahu retorted to this and said that he needs to visit Kashmir before planning a trip to Varanasi; things are bad in Kashmir.
To this Anupam Kher replied strongly in his trademark fashion saying that 'you are a journalist and should write an article about Kashmir, about how for the last 35 years, the terrorists have terrorized Kashmiri Hindus and violated their mothers and sisters. I'm praying for those lost souls.
Also, Read Jalandhar: Kejriwal says 'In previous govt gangsters were born', It's AAP's honest govt where they can't be saved'
The journalist didn't stop, even after this and said that "we write about it but, why should the present government not be held accountable for the violence. Your movie cleverly hid this aspect of this. Your movie has just spread negativity: in Kashmir and the country.
The film saw support from PM Modi and ministers in the centre, meanwhile, other people demanded it is banned. In the past few days, there have been targeted shootings in Kashmir and this has raised concerns against the movie as well. Kashmiri Pandits and migrants were targeted. Amidst this, Former CM Farukh Abdullah demanded the movie be banned to bring peace to the country.