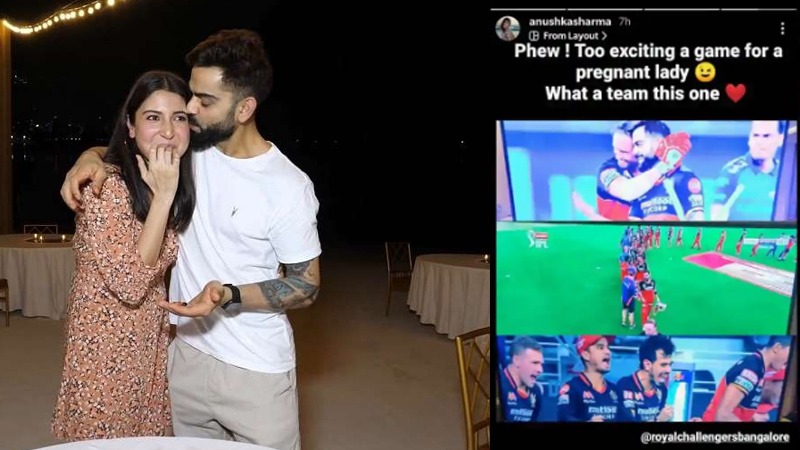 Anushka Sharma has shared some pictures after the victory of Virat Kohli's team on her Insta Story. She wrote in the caption - 'It was a very exciting game for a pregnant lady. Wow what a team This post of Anushka Sharma is getting viral on social media. Fans are reacting fiercely to this.

Let us know that recently Anushka Sharma gave a befitting reply to his statement to former India captain Sunil Gavaskar, in which he targeted Virat Kohli for leaving KL Rahul's catch against Kings XI Punjab. Following this statement by Sunil Gavaskar, there was a lot of uproar on social media.

Some people even asked the BCCI to remove Gavaskar from the commentary panel. Gavaskar made this comment on Virat Kohli and Anushka Sharma during the match of Royal Challengers Bangalore and Kings XI Punjab played at Dubai International Stadium. Anushka Sharma shared a post on Instagram and said, 'Mr. Sunil Gavaskar, I want to tell you that your statement is quite unpleasant. I want to ask you why you make such statements and blame his wife for playing a cricketer. I know it well that you have reset the personal life of every cricketer in the last few years, then you do not think that it should happen to me as well.

She further wrote that I am sure that since last night there will be many sentences and words in your mind to comment on my husband's performance or your words only matter when my name has been mentioned in them. She said that it is 2020 and for me things still have not changed. When will this happen when I will be dragged into cricket and such unilateral comments will not be made? ' Respected Mr. Gavaskar, you are a great player whose name holds high in this game of Bhadrajans. I just wanted to tell you how I felt when you said that.

Get the latest update about IPL13, check out more about Sunil Gavaskar Vs Anushka Sharma, IPL, True Scoop & IPL Updates