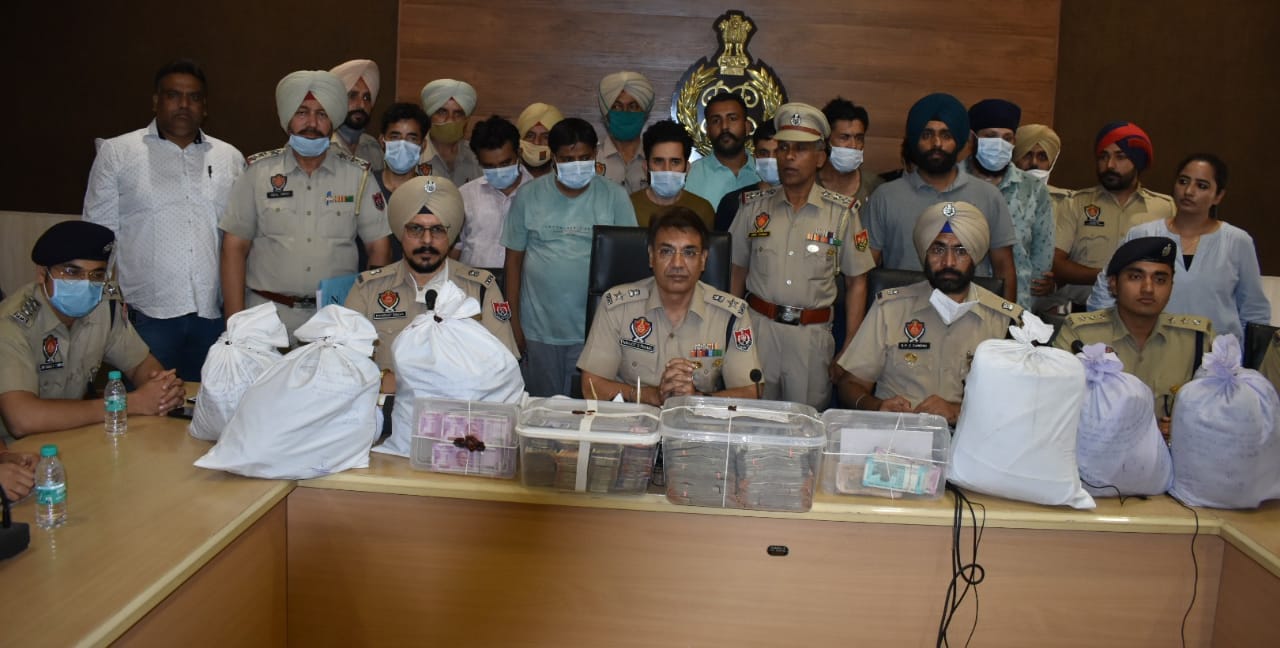 As action against Drugs being intensified on the directives of DGP Dinkar Gupta and IG Jalandhar Range Kaushtub Sharma, the Hoshiarpur Police have apprehended six more smugglers, who were indulged in the interstate drugs and hawala racket, by conducting raids in Delhi and Uttar Pradesh after revelations made by the four Afghan nationals who were arrested a few days back.

The SSP stated that the after getting success in unearthing the international drug racket at Delhi, two teams under SP (D) Ravinder Pal Singh Sandhu, SP (PBI) Mandeep Singh, ASP Garhshankar Tushar Gupta and CIA Incharge Shiv Kumar were constituted to get into the bottom of the drug racket. The teams got major success while conducting raids in Delhi, Uttar Pradesh and Jandiala Guru, said Navjot Singh Mahal adding that a team arrested Kishan Lal on July 5 with recovery of drug money worth Rs. 10.20 lakh and two mobile phones.

The team also apprehended Abhay Pratap Singh of Ghaziabad with a mobile phone. After their arrested, it was revealed that on Kishan’s instructions Abhay got Rs. 80 lakh drug money from Imtiaz, which he further gave to the former. The police had recovered Rs. 10.20 lakh from the said drug money from Kishan Kumar.

It was also disclosed that accused Kishan Kumar was also running hawala racket to utilise the drug money through Abhay and Imtiaz. The SSP also mentioned that the team of SP Mandeep Singh and ASP Tushar Gupta conducted a raid on July 6, 2021 in Uttar Pradesh to arrest Imtiaz Ahmad and seized 250 gram heroin and Rs. 12 lakh of drug money besides arresting Imran also along with 250 gram heroin.

On revelations made by Imtiaz the police further made raid at Jandiala Guru where Jasbir Singh was arrested with 2 kg heroin and Rs. 17 lakh drug money. Similarly, Balwinder Singh was also arrested from Bhagpura in district Haridwar, Uttrakhand with 700 gram heroin, Rs. 92,000 drug money and a swift desire car bearing no. PB-02-BG-6699.

SSP Navjot Singh Mahal also revealed that the district police arrested Sarbjit Singh alias Sethi and Gagandeep Singh alias Gagan on July 1, 2021 under section 21 (C)/61/85 of the NDPS Act in Garhshankar police station, who revealed about the international drug racket in which four Afghanis were indulged.

Also Read: Gangster Kulbir Naruana shot dead by his gunman at his residence in Bathinda

He said that four Afghani national arrestred from Delhi were identified as Mujahed Shinwari, a native of Nangarhar in Afghanistan; Mohammad Lal Kaker, Jannat Gul Kakar and Samiullah Afghan, trio from Kunduz region of Afghanistan. After their arrest, six more accused had been apprehended with recovery of 3 kg 200 gram heroin and drug money worth Rs. 40.12 lakh from them.