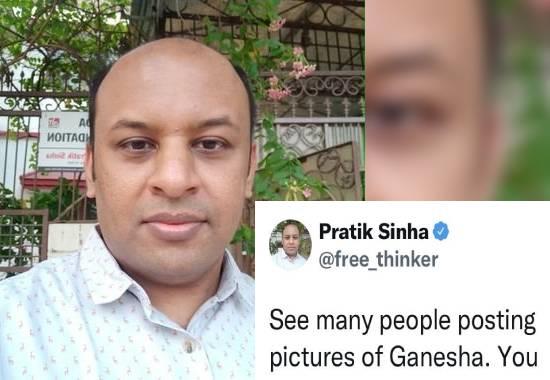 In a key development, Delhi's Patiala Court on Saturday rejected the bail plea of AltNews Co-Founder Mohammed Zubair. Chief Metropolitan Magistrate Snigdha Sarvaria of the Delhi Court sent the Alt News co-founder to 14-day judicial custody, after the expiry of his four-day police custody.  The fact-checker was arrested in the case related to the 2018 tweet, for allegedly 'hurting religious sentiments and promoting enmity in society. In the backdrop of this case, Netizens on Saturday started trending #ArrestPratikSinha and dug out his tweets mocking Hindu gods and goddesses.
Who is Pratik Sinha and why #ArrestPratikSinha is trending?
For the unversed, Pratik Sinha is another Co-Founder of the controversial AltNews. Going by his bio on his Twitter handle, apart from being the co-founder of AltNews along with Mohammed Zubair, Pratik is a Software Engineer and also calls himself a 'fact-checker' like his partner who has been sent to a 14 days judicial custody. As soon as Mohammed Zubair was sent to 14 days of judicial custody, #ArrestPratikSinha started trending with netizens demanding his arrest over his objectionable remarks on Hindu gods and goddesses.
Here are some controversial tweets made by AltNews co-founder Pratik Sinha
Also Read: Supreme Court slams Nupur Sharma over Prophet remarks: 5 quotes by Justice Kant; 'calls her arrogant'

AltNews Mohammed Zubair Case
Coming back to AltNews Mohammed Zubair case, he has been booked under section 153A (promotion of enmity between different groups on grounds of religion, race, place of birth, residence, language) and 295A (Deliberate and malicious acts, intended to outrage religious feelings of any class by insulting its religion or religious beliefs) of the IPC.
Zubair was arrested on June 20, after which, the police claimed that the fact-checker was evasive during interrogation, and accused him of not providing the necessary technical equipment for the purpose of the investigation. The Police further stated that he had formatted his phone before being taken into custody.