Arvind Kejriwal made 10 promises to Punjab traders; know what it’s about 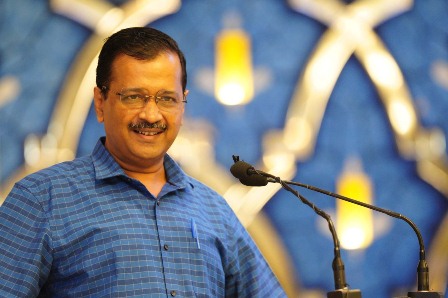 The Aam Aadmi Party (AAP) National Convener and Delhi Chief Minister Arvind Kejriwal made 10 promises to the traders and businessmen of Jalandhar for the development and upliftment of industry, trade and commerce and appealed to them to be part of the AAP government to be formed in 2022. Seeking the support of traders, businessmen and industrialists, Kejriwal said, “You have tried the Congress-Captain and the Badals, now give us a chance. We don't need funds from businessmen, we just need support.”

Arvind Kejriwal was addressing a programme titled ‘Kejriwal's talk with traders and businessmen’ held in Jalandhar on Wednesday for the purpose of soliciting suggestions to the problems and difficulties faced by the traders and businessmen of Jalandhar along with Punjab; which was organized by AAP Punjab. He appealed to the industrialists and businessmen of Punjab that give the AAP a chance too and you will forget everyone else, the example of which has been given to the people by the Delhi government of AAP. He said the AAP has done a miracle in Delhi for business and trade and will do it in Punjab too. Bhagwant Mann, Jarnail Singh, Raghav Chadha, Harpal Singh Cheema and Aman Arora were also present on the stage.

After listening to the problems and solutions of the traders and businessmen, Arvind Kejriwal first announced 24-hour uninterrupted power supply for the industry. Kejriwal said at present there are long power-cuts in Punjab and without electricity; neither industry nor trade could run smoothly. He said on formation of the AAP government, 24-hour power supply would be provided; as done by the AAP in Delhi.

Second, Arvind Kejriwal announced that red-tapism and ‘inspector raj’ will be ended. He said corruption runs in the system because the intentions of the governments were bad. “If there is an honest CM and cabinet at the top then I can challenge that the entire structure below will be alright. We did this in Delhi,” he said. Kejriwal said, “Old laws will be rectified and unnecessary laws will be scrapped. A system will be built wherein existing industries need not waste time over government and will be able to invest their time in business.”

Third, on the problem of VAT refund, Arvind Kejriwal said that on formation of the AAP government in Punjab, a certainty will be there and the VAT will be refunded to the businessmen between 3 to 6 months and an installment system will be made for big refunds. Fourth, he announced that infrastructure will be strengthened. He said 80 percent of industries were located outside the focal point and there were many problems including roads, water and sewerage; which the AAP government will solve by bringing a budgetary provision.

Fifth, Kejriwal announced that the enhancement process will be ended on the formation of the AAP government in Punjab. He said that first the Badal government and then the Captain Amarinder Singh-led government talked of resolving the issue of enhancement, but nothing was done. Kejriwal requested the traders, businessmen and industrialists to give the AAP a chance so that the enhancement charge can be completely ended.

Sixth, he said that CLU (Change of land use) and other types of hassles will also be ended at the areas which have been declared as industrial zones with an automatic intimidation only. Seventh, the AAP national convener said that extortion in the form of ‘monthly’ and ‘weekly’ will also be eradicated along with ‘goonda tax’ which continues unabated. He said ‘goonda tax’ was collected from every truck as the system had been occupied by the ministers. “It is my guarantee to end this system and it will be our responsibility to let the traders work smoothly,” he added.

In his eighth announcement, Arvind Kejriwal said that he has come to invite the traders and businessmen to become partners in the future AAP government. He said on the formation of the AAP government in Punjab, a joint body of businessmen-traders will be formed, which will be headed by a minister. The joint body will have representatives from each business sector so that it could get geographically and sector-wise representation; and will meet every month. “Decisions will be taken during the same meeting and the government will implement them immediately,” he said.

Ninth, he said that peace, law and order will be strengthened in the state. Kejriwal said that Punjab is a border state and the law and order with its secular structure should be maintained here. With the formation of the AAP government, such an atmosphere will be created in Punjab that everyone can live together in harmony.

In his tenth announcement, Arvind Kejriwal said that more emphasis will be given to small traders and MSMEs so that unemployment will be generated. Taking a promise from the industrialists, businessmen and traders, Kejriwal assured that he will ensure employment to the unemployed and the AAP government will resolve all their problems. He claimed that such development will be done so that no one will remain unemployed in Punjab. Kejriwal urged the industrialists, businessmen and traders to make the AAP win all nine seats of Jalandhar.

Earlier, AAP Punjab president and MP Bhagwant Mann, while welcoming party chief Arvind Kejriwal and industrialists, said, “The direction and state of politics is changing. The big parties are looking at the AAP and setting political agendas.” He alleged that the industries were going out of Punjab under the rule of the ruling party. Industries and trade from Mandi Gobindgarh to Dhariwal Gurdaspur have shifted to other states as there is no industrial policy, he added.