Not Khalistani but Real National Heroes: Punjab soldier who carried farmers' flag at his marriage returns home wrapped in Tricolour

The 26-year-old who married in February of this year was among the five soldiers who fought for the country and laid down his life in Jammu and Kashmir’s Pooch district in a serious gunfight with militants on Sunday. 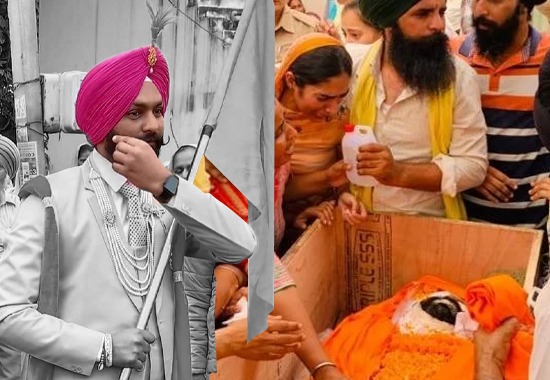 'Jai Jawan, Jai Kisan' - the slogan was once again embraced by Martyr Gajjan Singh of the farmer family in letter and spirit. Being from a farmer family himself, the Indian brave-heart felt immensely for the cause of farmers and had raised the flag of ongoing farm protest in his wedding.

Where several political parties and a considerable number of Indian’s called protesting farmers terrorists and Khalistanis, Gajjan Singh fought for the country and laid down his life in Jammu and Kashmir’s Pooch district in a serious gunfight with militants on Sunday.

Hailing from Punjab’s Ropar, Singh who had gotten married just months ago is survived by his wife Harpreet Kaur and parents, Charan Singh and Malkeet Kaur.

The 26-year-old got married in February of this year and a picture of him in wedding attire waving a farmer union flag went viral on social media.

Gajjan, the youngest of four brothers, had recently visited his family to attend his brother's wedding. Six years ago, Sepoy Gajjan Singh became the first member of his farmer family to join the army. Gajjan's father and three brothers continue to work as farmers on their modest land.

Since news of his martyrdom in a gunfight with militants in Poonch reached his family, the Pachranda village has been in grief.

While his newlywed bride is heartbroken, father Charan Singh said, "We never imagined such a day would come. We've lost everything.”

"Gajjan was a farmer at heart, and he used to work in the fields with me like his older brothers. He, on the other hand, was always talking about joining the army. His dream came true six years ago, and it also helped improve the family's economic situation," Charan Singh added.

“The farmers' protest against the three agricultural laws was at its peak when Gajjan came home in February for his wedding, and he was saddened to see his brethren sitting on roads during the winter.”

"To show his support for the farmers, Gajjan not only carried the Kirti Kisan Morcha flag but also walked around the village with his newlywed bride shortly after coming home to voice his protest against the agricultural rules," Charan Singh added.

India will always be indebted to these heroes who sacrificed their lives in Poonch, Jammu and Kashmir while protecting the country and its citizen from terrorists. Their bravery reflects their selfless love for the nation.

We salute the families who have bestowed such great heroes upon the Indian Army. For their tremendous sacrifice, India will always be grateful.