Aryan Khan was granted bail in the cruise drug case by the Bombay High Court. 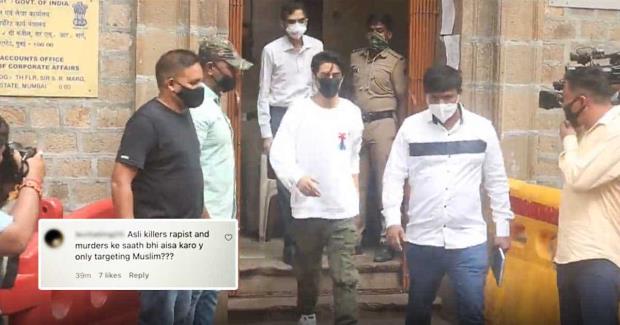 Aryan Khan appeared at the NCB today and videos of the same are going viral on social media. Shah Rukh Khan fans all over the world are pouring in love for his son and praying for the drug case to get resolved as soon as possible. Now, a netizen has commented on Aryan’s video of entering the NCB office and asked to treat the rapists in a similar way. Scroll below to read the scoop.
Aryan was arrested in October first week and got released on October 29th and ever since then, he has to appear before NCB every Friday.

This was Aryan Khan’s first appearance after his birthday which was on November 12th. The star kid was spotted wearing a white sweatshirt and paired it with moss coloured pants and matching sneakers. Aryan Khan moved right straight into NCB’s office and didn’t pay any attention to the media.

As soon as the video went viral, fans started pouring love and support for Aryan and a user commented, “Asli killers rapist and murders ke saath bhi aisa karo y only targeting Muslim???” Another user commented, “Stay Strong Aryan We Stand With You. Future Superstar” A third user commented, “So sad. This is a pain to visit the office every now n then for doing nothing. Stay strong Aryan.”

Aryan Khan was granted bail in the cruise drug case by the Bombay High Court.