PM Modi had already arrived in the poll-bound state. He was set to lay the foundation stones for many projects in Punjab. 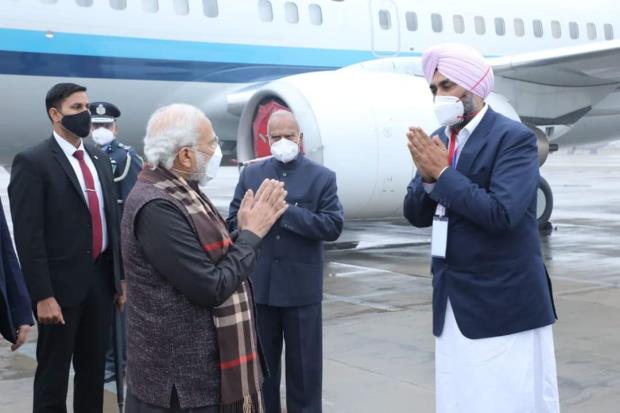 In a major development, Prime Minister Narendra Modi cancelled his visit to Punjab's Ferozepur. If reports are to be believed, the visit was suspended as protesting farmers blocked roads.
However, the reason is not confirmed by officials.
Mr Modi had already arrived in the poll-bound state. He was set to lay the foundation stones for many projects in Punjab.
In his first visit to the state after farmers' protest, the PM was scheduled to address a rally. Farmers from Amritsar and Tarn Taran districts unified under the banner of Punjab's Kisan Mazdoor Sangharsh Committee (KMSC), on the other hand, opposed Mr Modi’s visit. Protestors claim that their demands for justice, the enactment of the MSP Guarantee Act, and the dropping of cases against farmers and labourers in all states have not been met.
Also Read: Sukhdev Dhindsa, headed to PM Modi's rally, tests positive for Covid
Meanwhile, the venue itself was seen empty owing to bad weather conditions. Due to the rain, just a small crowd was seen at PM Modi's rally site. Only about 500 people had arrived at the 20-acre open-air venue.
Former CM Capt Amarinder Singh, BJP MP Hans Raj Hans, BJP Punjab Incharge Gajender Shekhawat, BJP state president Ashwani Sharma, Fatehjung Singh Bajwa had managed to reach the venue despite heavy protest by farmers and were seen stage at the Ferozepur rally.
Now, Captain Amarinder Singh has been addressing the rally.