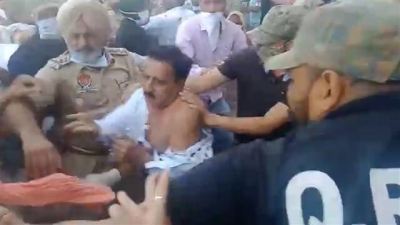 The attack on BJP legislator from Abohar, Arun Narang on Saturday in Punjab's Malout town has drawn widespread criticism from netizens, some of whom expressed shock seeing the way the Narang was thrashed by the protesting farmers.

As per BJP leaders who accompanied Narang to attend a press conference in Malout, the MLA was injured after he was heckled by a group of protesters. His clothes were allegedly ripped off by the protesters, who also threw black ink on him as soon as he arrived there.

The BJP leaders left the spot in a huff, alleging that the Congress government in the state was behind the incident.

Meanwhile, the protesters, who had gathered there ahead of the arrival of the BJP MLA, told Narang that the farm laws passed by the Centre were against the farmers and they should be revoked, otherwise, no BJP leader would be allowed to address the people in the state.

The vehicle of BJP MLA was also disfigured with black paint. A video of his heckling has gone viral on social media, in which the police could be seen trying to protect and ensure the safety of the legislator. A senior police officer too received injuries in the scuffle.

Well, the incident definitely did not go down well with the netizens! Have a look how people reacted to the viral videos

From Punjab CM to BJP leaders to other politicians and even common people and media persons, everyone out there has criticized the incident especially thrashing and stripping a person out in public. Here’s a quick read to some of the tweets below:

What the hell is happening in Punjab? @capt_amarinder, a @BJP4India MLA was beaten n stripped by so-called ‘farmers’ while police looked on? If this happened in a @BJP4India state, imagine d uproar in media! But this is @INCIndia state, so all is quiet. 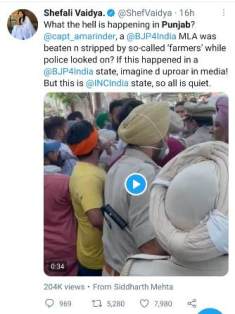 Disturbing visuals of BJP MLA from Abohar, Punjab being assaulted & stripped naked by the public in protest. People's anger is justified, but violence doesn't help the cause. There is deep anger against BJP across India and BJP Govt must shed its arrogance & address people.

Bharatiya Janata Party (BJP) MLA from Abohar Arun Narang stripped & beaten up! These are anarchists not annadatas! Sadly, Punjab govt has been protecting these anarchists be it the 26th Jan Tiranga desecration or telecom tower destruction! Will the so-called Farm Netas condemn? 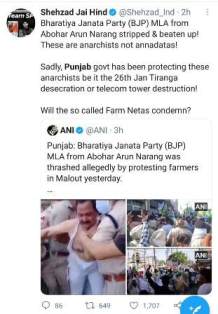 #DeathOfDemocracy in Punjab. Anarchy at its peak. Credit goes to @INCIndia for bringing the khalistani terror back in Punjab! #BJPAttackedinPunjab

What happened today to a @BJP4India MLA ( Abhor) is not what Punjab and Farmers stand for. This is not our Culture and should be condemned outrightly. Punjab is a tribe of Bravehearts and warriors but never known for such cowardly mob attacks. This is not what our Guru's preached. 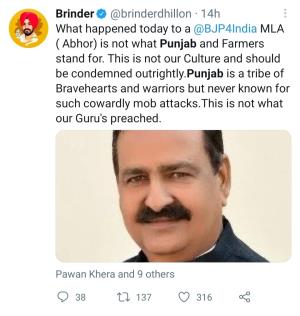 Has the law and order totally collapsed in Punjab? BJP MLA, Arun Narang beaten to a pulp, stripped naked in police’s presence by a violent mob in Malout, Muktsar. If this is what can happen to an elected MLA, I shudder to think about the state of an average BJP voter in Punjab.

Now the biggest question, why are farmers resorting to violence??

It’s been six months now that farmers are protesting against the three Central farm laws passed by the Parliament in September last year. Over 200 farmers have committed suicide or died due to nail-biting cold or other health problems at the three Delhi Borders in last six months.

Farmers are angry over the fact that Modi-led-BJP government is not paying heed to their demands and supporting laws that would rather promote big brands – Ambani and Adani.

Gurbachan Singh, a Jalandhar-based farmer, said, “We are disappointed over the fact that our government is supporting such laws that farmers do not want for themselves. So many of our brothers, fathers have died, but what we see is the videos of the BJP leaders making fun of their deaths”.

“The funda is simple, if the laws are for farmers, it should have been devised taking consent from farm leaders. Now when if farmers are saying they don’t want such laws, why is this government so adamant and not ready to repeal it?, said Singh, adding that we never wanted to adopt this non-violent way, but what happened with farmers in Delhi, the way they were put behind bars for no reason, is what makes us angry.

Know how Punjab Govt and BJP leaders reacted to the incident

Strongly condemning the attack on BJP MLA from Abohar, Arun Narang, allegedly by angry farmers protesting the Centre’s Farm Laws, Punjab Chief Minister Captain Amarinder Singh and Speaker Rana KP Singh on Saturday warned of strict action against anyone trying to disturb the state’s peace by taking the law into their hands.

Captain Amarinder also directed DGP Dinkar Gupta to take strict action, under the law, against the perpetrators, who also clashed with the police personnel who tried to rescue the MLA. Meanwhile, as many as 250 persons have been booked and an FIR has been registered in the case.

Meanwhile, BJP national general secretary Tarun chugh, said that murderous attack on BJP MLA Atul Narang has exposed complete collapse of law and order in Punjab. In a statement he held Chief Minister Amarinder Singh squarely responsible for it and said that it looked like the Congress strategy to engineer attack on the BJP leaders on the pretext of farmers.

What Arun Narang said after the incident?

Abohar MLA, Narang termed Punjab Police negligence to be the main cause of the incident. He said despite his request police failed to arrange more security personnel. He said the protesters were armed, while the police had no weapons not even a stick to handle the situation.

“I don’t say they were farmers who attacked on me, but yes they all were holding Kisan Flags. If they were anti-social elements and some politically motivated goons, then it’s the duty of the government to ensure law and order in the state”, he said.