The Ayodhya Saryu viral video shows a man kissing his wife while a tip into the holy Saryu river in Ayodhya, UP. 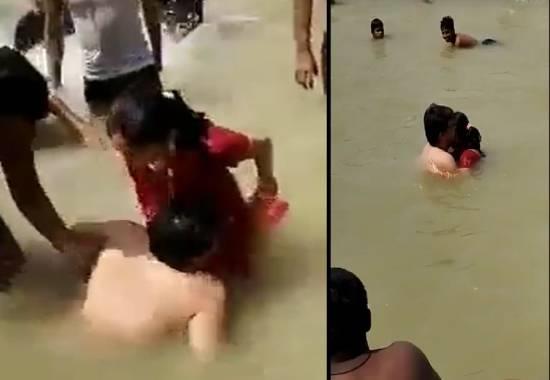 Getting cozy for a couple in Ayodhya's Saryu river did not go well as the Husband was beaten by the devotees present around them. The Ayodhya viral video has been doing rounds on social media and netizens are seen divided on the incident. The Ayodhya Saryu viral video shows a man kissing his wife while a tip into the holy Saryu river in Ayodhya, UP.
Known as 'Ram ki Pariri', the Saryu riverside was recently renovated and therefore devotees of Lord Ram and tourists often visit this place. Reportedly, the Ayodhya Saryu viral video started doing rounds and it was revealed that the newly-wed couple was having a cozy moment in the river, while other people around noticed them. While the husband kissed his wife, a group of people came toward them and pulled the man outside the river. Pulling the husband outside the river, the angry group accused the couple of getting involved in inappropriate behavior at a place of worship.
Following this, the angry group of people started beating the husband for kissing his wife in the holy Saryu river of Ayodhya. As per Aaj Tak report, SSP Ayodhya Shailesh Shinde has stated that the Ayodhya Husband Wife kissing viral video is a week old. However, there has been no complaint registered yet by the couple. In fact, the Police is trying to reach the couple and talk to them about the incident in order to file a complaint.
Watch the Ayodhya Saryu River Husband Wife Kissing video
Also Read: Congress' Alka Lamba 'Rakhi Sawant 2.0' quip netizens post viral video shows her scuffle with Delhi Police