Ayushmann Khurrana, Making The Rest Of Us Look Bad On Monday And Every Other Day 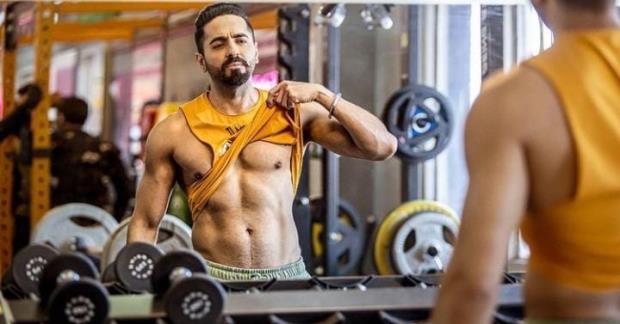 Is there anything Ayushmann Khurrana cannot do? We think not. Acting, singing and hosting aside, the actor has now become synonymous with family entertainers that also drive home a social message. And along with all that he does, Ayushmann Khurrana also manages to drop some much-needed Monday motivation posts for the benefit of his Instafam.

This week, the actor has shared a still from his upcoming film Chandigarh Kare Aashiqui and believe us when we say that the picture will make you want to hit the gym. In the picture, the actor is seen checking out his abs in a mirror, looking chiselled as ever. This comes as no surprise given that the actor plays a gym instructor and fitness enthusiast in the upcoming film.

A few weeks ago, Ayushmann Khurrana treated us to another picture from the gym, this time of him taking a break between workouts. He added a lovely note of his musings in the caption. He said, “The red brick wall. The semi cloud covered sunlight creeping in. The taste of my homemade shake. With The Weeknd's latest song playing on loop. Fighting the pandemic with my randomic rhythms of life. That's not even a word. Randomic. Likhte hue iske neeche laal line aa gayi (A red line appeared below the word as I was writing it). But aren't we here to create our own lines and paths while travelling…”