‘Be careful what you ask for’: Sunil Jakhar to CM Channi over centre’s power stretch through BSF 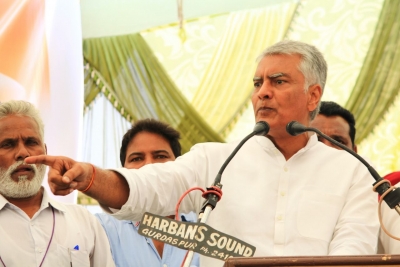 The recent decision of Home Ministry which has extended the jurisdiction of the Border Security Force (BSF) across a 50-km stretch of India's border in Punjab, empowering its officers with powers on par with state police, including the authority to arrest, conduct raids and seize, has not gone down well with Punjab’s former PPCC Chief Sunil Jakhar.

Sunil Jakhar took to twitter on Wednesday to share his reaction on the development. Taking a dig at Punjab CM Charanjit Singh Channi, Jakhar in a tweet said, “Be careful what you ask for ! Has @CHARANJITCHANNI unwittingly managed to handover half of Punjab to Central govt. 25000sq km (out of total 50,000sq km) has now been placed under  BSF jurisdiction. Punjab Police stands castigated. Do we still want more autonomy to States ? 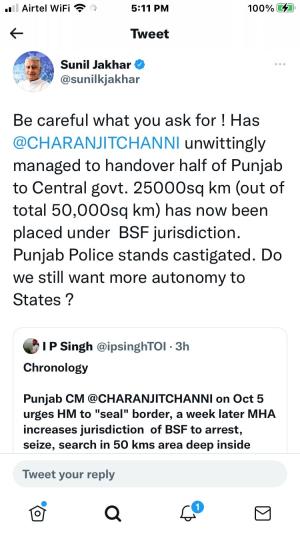 It is pertinent to mention here that Punjab CM Charanjit Singh Channi last week met Union Home Minister Amit Shah at his home in Delhi to discuss the violence in Uttar Pradesh and the farm laws.

CM Channi then said that he had urged Union Home Minister Amit Shah to repeal the three farm laws. Besides, he had asked him to seal the international border with Punjab to curb trafficking of drugs & weapons.

Meanwhile, according to the MHA notification, the central government has revised the 'schedule,' defining the border stretch where the BSF will have search, seizure and arrest powers under Acts such as the Passport Act, NDPS Act, Customs Act, and Criminal Procedure Code (CrPC) to Manipur, Mizoram, Nagaland, Tripura and Meghalaya; and UTs of J&K and Ladakh as well as a 50-kilometre stretch in Gujarat, Rajasthan, Punjab, Bengal, and Assam.

Moreover, the extension of the BSF's jurisdiction into the non-BJP states of Bengal and Punjab, which is governed by the Centre is expected to cause tensions between the Centre and the state governments.