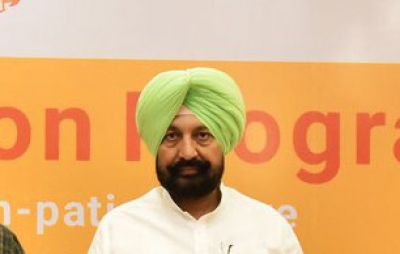 Health Minister Mr. Balbir Singh Sidhu said that Captain Amarinder Singh led Punjab Government is working on war footing to impart quality treatment to the COVID-19 patients and no stone was being left unturned for this noble cause.

The Minister said that rather all such services are also being provided to the serious patients who are coming from Delhi to Punjab after failing to get a bed in COVID Care Hospitals.

While responding to allegations of AAP Party for not doing anything for COVID-19 patients, Mr. Sidhu asked the Aam Admi Party that before raising questions at Punjab Government, I asked them to just take a look at the severe COVID-19 situation of Delhi with open eyes. He said that it is a critical and sensitive time so instead of shattering the confidence of Health Care Workers and Front Line Workers through their cheap political tantrums, the AAP leaders must question their Party Convener Mr. Arvind Kejriwal that Why he has failed to tackle the situation in Delhi thereby putting the precious lives of people in peril ?

AAP owes answer to people as why innocent patients are dying due to non-availability of beds and treatment in hospitals.

Mr. Sidhu said that Chief Minister Delhi has claimed that he will assure to share the resources of health facilities when these are in a position of being shared while Captain Amarinder Singh's Government is already providing all such healthcare services to Delhiites without any partiality.

Health Minister asked the LOP, Vidhan Sabha Punjab Mr. Harpal Singh Cheema, if you are real Punjabi and have sympathy in your heart for the COVID-19 patients then you have  to encourage the medical fraternity and other concerned departments of Punjab instead of playing petty politics.