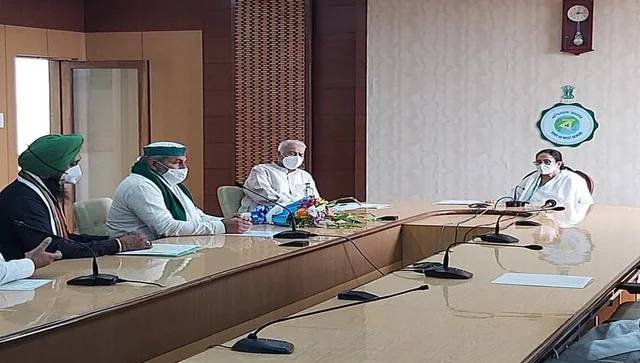 Ms Banerjee has assured her and her party’s support for their agitation.

At the meeting, the Trinamool chief said that there should be a platform where states can discuss policy issues.

"Bulldozing states is not good for the federal structure," she said.

Yudhvir Singh, general secretary of the BKU, told news agency PTI, "We want to congratulate Mamata Banerjee for her electoral victory and to elicit her support for the move to give farmers a fair MSP for their crops." lack of specified MSP and excess produce often leads to farmers suffering from low prices which results in huge losses, which causes farmers suicides in the country, he added.

Mamata’s support for the north-India based farmers unions comes after her party announced it would spread its footprints outside West Bengal. After the meeting, she announced that her "support for the farmers' movement will be there" and added that "India is hungrily waiting for policies which help in fighting COVID-19, assist farmers and industry".

“why is it so difficult to talk to the farmers?", she asked rhetorically.

This came as a reference to the failure in the communication between the centre and the farmers who have been camping at Delhi's borders for the past one year against three farm laws passed by the Parliament.

The protesting farmers believe that the new laws will commercialise agriculture without providing enough protection to small scale farmers from exploitation by large retail chains and industry. These laws will keep them under their mercy.

"The BJP rule has been disastrous for all sectors from healthcare to farmers to industry. India is suffering...we are facing both natural and political disasters," Ms Banerjee said.

Farmer leaders have requested her to speak to other state leaders on the peasant’s issues and organise a dialogue with farmers' unions, she said.

"The farmers' movement is not just for Punjab, Haryana or Uttar Pradesh. It is for the whole country," she said, adding that states should come together to discuss policy issues and stand together against injustice.

Why did Tikait make this move?

Tikait and other farmers have been agitating against the centre’s law since last year, which has borne no fruits for them by far as the government remains fixed at not withdrawing these laws. For flagging their movement, they need the support of political legitimacy that Mamata can grant them. The enemy of my friend is my friend seems fit here, as Mamata is a staunch enemy of Modi and centre led by Modi, thus, her support could be a potential force multiplier for their cause.