Fans react to rumours of Simba Nagpal being out of the show. They say, 'Sukoon se sone bhi nahi diya use'

Bigg Boss 15's sleeping giant Simba Nagpal is apparently out of the house. This has been reported by a couple of big social media accounts that give Bigg Boss updates to fans. Simba Nagpal's presence in the house was a hotly debated one. People have criticized the channel for keeping him when he was literally not doing anything. There are many shots when we have seen that Simba Nagpal is sleeping or eating away as the house is caught in the middle of fights or drama. This level of unbothered-ness made him a unique personality but it is not what is needed in Bigg Boss 15. This is how fans reacted to getting the news that Simba is finally out. Check out the tweets. 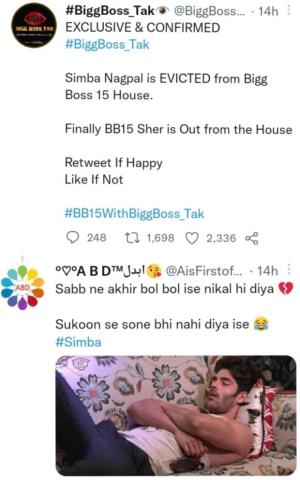 In fact, Simba Nagpal had come into his own in the past 10 days or so. He was playing alone and a couple of things he said made a lot of sense. On Weekend Ka Vaar, Salman Khan had called Simba Nagpal, the panda of the house. In fact, he also schooled him by making him sleep during the last WKW.

Simba Nagpal has been part of MTV shows like Splitsvilla and Shakti-Astitva Ke Ehsaas Ki. In his own style, he did make people laugh. And yes, if true, we will miss his handsome looks inside the house.