The Bihar Agnipath scheme violence video is going viral in which a 'masked' students were caught threatening 'to burn India'. 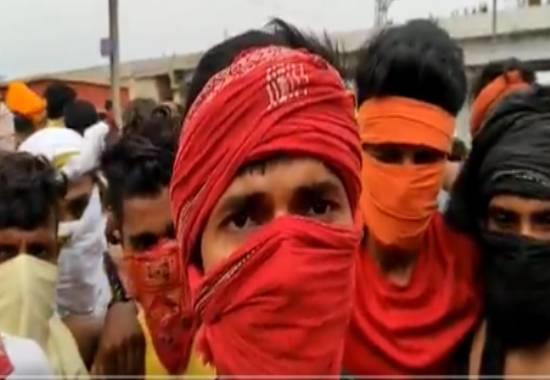 The announcement of the Agnipath Scheme by the Government of India has started a new row with students and youngsters taking the streets. The Agnipath or 'Tour of Duty' Scheme has enraged the students and as a result, protest has been spreading nationwide.  The Agnipath scheme announcement sparked nationwide protest and students set various trains on fire and damaged public property with their sole demand of the rollback of the Agnipath scheme, especially in UP and Bihar. Now, the Bihar Agnipath scheme violence video is going viral in which a 'masked' students were caught threatening 'to burn India'.
In the Bihar Agnipath protest viral video, a 'masked' student was seen interacting with News18, while other students stand in solidarity. In the Bihar Agnipath scheme protest viral video, a student says, "The scheme is totally wrong. Why will we go into the army for only 4 years? It takes 3 years to prepare for Defense and we do duty only for 3 years? Then after we come out, there will be nothing for us. The government is arranging jobs for us in the IT sector. Will we do guarding in the IT sector? "
"We want the government brings the old scheme. Exams must be conducted for the students who are medically and physically fit for the past two years. Our demand is to take the examinations as soon as possible and the rollback of the Tour of Duty scheme. Till the government does not roll back this scheme, the entire country will burn."
Watch Bihar Agnipath Protest Viral Video
Also Read: Agitators destroy Ludhiana Railway Station in Punjab
About Agnipath scheme
For the unversed, on June 14, the government of India announced the Agnipath scheme for youth to serve in the three services. Students aged between 17.5 and 21 years will serve in the force for a period of four years, following which 25% of the Agniveers will be retained for regular service. The Apnipath scheme has been launched by the government to bring a change in the enrollment of soldiers.
Chief Ministers of several states, including Assam and Haryana, have said that Agniveers will avail preference when it comes to recruitment for state government jobs or police recruitment. Home Minister Amit Shah has also announced that Agniveers will get preference for employment in central paramilitary forces.