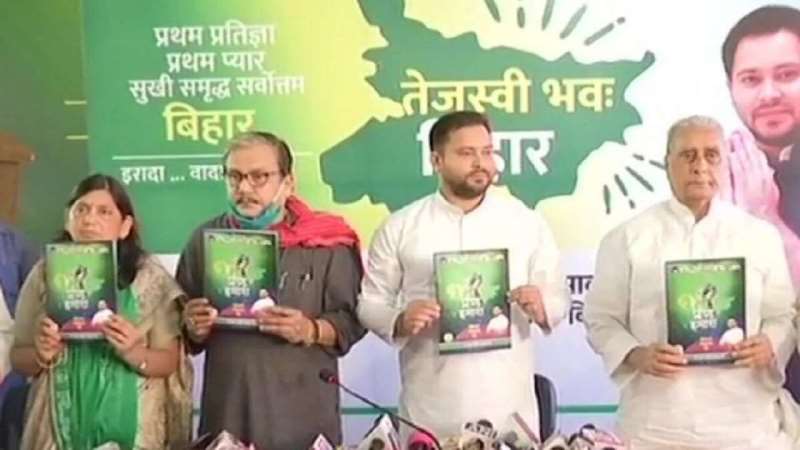 As lakhs of Bihar voters are poised to exercise their franchise in the first phase of Assembly elections, the RJD on Saturday released its manifesto or vision document, reiterating the promise to recruit 10 lakh persons in government jobs if the party returned to power.

Tejashwi said his party would fulfill all promises made to the people.

The RJD manifesto said nearly 10 lakh government jobs would be give in the very first state Cabinet meeting after returning to power as well as abolition of contractual labour system.

It also promises to further strengthen self-help groups and priority to higher education and employment. It pledges to implement local policy in any government job in the state, ensuring at least 85 per cent reservation for local candidates.

The RJD also promised to provide 'equal wages for equal work' to the people of Bihar and implement the old pension scheme.

To woo the young voters, the manifesto promised no fee for filling examination forms for government jobs and free travel to examination centres.

Releasing the manifesto, Tejashwi said: "We are not making tall promises but will fulfil the promises made to the people of Bihar."

Tejashwi dubbed the BJP's promise of giving 19 lakh jobs as a tactic to fool the electorate in Bihar.

The RJD is set to contest the upcoming state polls in alliance with the Congress and the Left parties.

The elections for 243 Assembly seats will be held in three phases - for 71 seats on October 28, for 94 seats on November 3, and remaining 78 on November 7. The results will be announced on November 10.