“BJP Like A Snake, I am The Mongoose”: Swami Prasad Maurya Lashes out BJP in a tweet

Yesterday, in an interview with NDTV Mr Maurya had declared that "the endgame has begun for the BJP" and he would be the one to take down the party 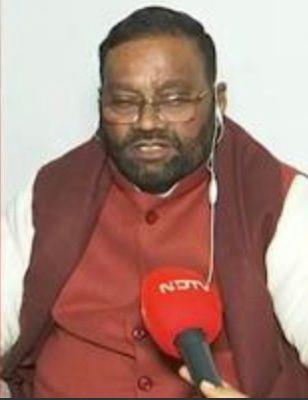 Swami Prasad Maurya, who quit Uttar Pradesh Chief Minister Yogi Adityanath's administration and is driving the trip of in reverse rank pioneers from the BJP, has taken out a snake-and-mongoose narrative for his political moves.
"The RSS is like a cobra, BJP is like a snake. Swami Prasad Maurya is like the mongoose who won't give up till they are wiped out from UP," Swami Prasad Maurya wrote in Hindi in a tweet.
Yesterday, in an interview with NDTV Mr Maurya had declared that "the endgame has begun for the BJP" and he would be the one to take down the party.
He had hammered the BJP, utilizing the similitude of python eating up the freedoms of Dalits, jobless, ranchers and others.
Mr Maurya surrendered as pastor in the BJP government on Tuesday yet has not officially left the BJP. He has likewise not affirmed reports of his hybrid to Akhilesh Yadav's Samajwadi Party.
Seven additional pioneers, including two priests, have surrendered from that point forward.
Also Read: Malvika Bansod: Know About the 20 years old star who defeated Saina Nehwal in India Open 2022
Mr Maurya said he had griped to the BJP administration about Yogi Adityanath's authority and had raised what he called the disregard of Dalits, in reverse standings, ranchers and jobless by the state government however the party didn't respond.
Last year, Mr Maurya and a couple other MLAs had even met with top pioneers however after a focal BJP group did an interior audit, very little changed.