BJP's Gujarat Playbook: Prepone elections by 10 months or nominate a Patidar as CM

Mandaviya was appointed as the Union Health Minister after Dr Harsh Vardhan resigned amid the controversy surrounding the government's incompetency and non-preparedness to handle Coronavirus second wave. 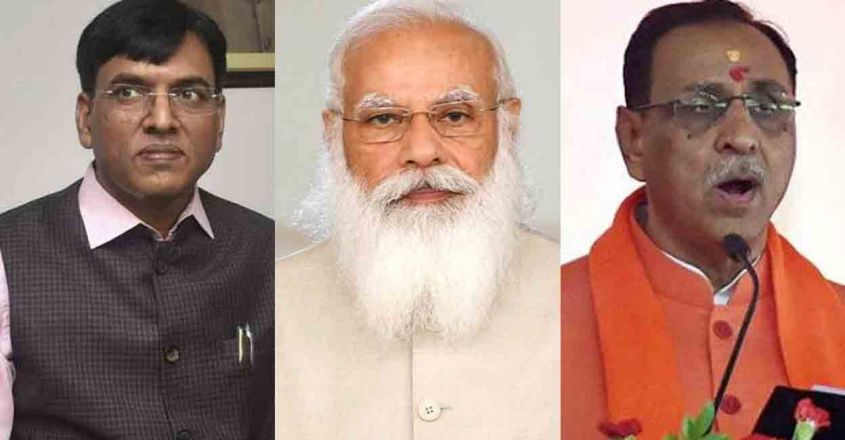 The Bharatiya Janata Party's reign in Gujarat will complete its tenure in December 2022, but Chief Minister Vijay Rupani's sudden resignation has raised speculations in the political world.

Experts are talking about two possibilities that seem to have a strong foot.

Firstly, political commentators believe that Manaukh Mandaviya could be made the CM. The Patidar society can be the reason behind the reason for it. As soon as CM Rupani had quit the ministry, the names of Deputy Chief Minister Nitin Patel, former Home Minister Gordhan Zadafia and Purushottam Rupala were flashing on television. However, the names came along with the mention of PM Modi's Gujarat dream.

State chief CR Patil said in the next Gujarat assembly elections, Modi aims for BJP to get more than 150 seats and Gujarat BJP will create a new record.

At present, there's only one name visible that could bring PM Modi's aim to reality in Gujarat.

Mansukh Mandaviya, a leader who belongs to the Patidar community of Gujarat, is also in the good books of Narendra Modi and Amit Shah. Mandaviya was appointed as the Union Health Minister after Dr Harsh Vardhan resigned amid the controversy surrounding the government's incompetency and non-preparedness to handle Coronavirus second wave.

Currently, the Patidar community is furious over BJP, which comes as a challenge for the centre ruling party.

Here, Mandaviya could play a crucial role as he has a good rapport with the  Kadwa and Leuva Patel communities apart from the Patidar community. Besides being known for being soft-spoken, Mandaviya has the image of an honest leader. Also, he has maintained good relations with almost all the BJP leaders in Gujarat.

Meanwhile, BJP's seats and popularity has witnessed a declining trend since the last three elections and AAP has gained strength in Gujarat in the last municipal elections.

The BJP won 117 seats in 2007, which was reduced to 99 in the 2017 elections. At the same time, Congress had won 59 seats in the 2007 elections, which rose to 77 in the 2017 elections. This sequence of decreasing seats shows that there is an anti-incumbency wave in the state. Apart from this, these two current incidents indicate that BJP will not wait till December next year for elections.

BJP stood victorious in the civic elections held on February 22 and 23 this year, where it got 483 out of the total 576 seats. While Congress got 55 and others had 38 seats in their account. With this, the intentions of the BJP are elevated.

APP is continuously increasing the sweeping in the state and gaining a stronghold.

BJP has recently conducted an internal survey regarding elections, that reveals two things. The Aam Aadmi Party's initial political performance in the local body elections has been better than the Congress. If pools are held in December 2022, AAP will have enough time to reinforce its strength in the state and it may buy that time to get some prominent leaders by its side.

The second analysis suggests that Congress still lacks popularity and activism amongst the people of Gujarat. The party's internal battle itself and conflicts has not been resolved yet, causing non-conduction of the State Congress Committee elections in Gujarat, which has been pending for six months.

In such a situation, the Congress, which had 234 office bearers 6 months ago, is currently running on the strength of only 3 working presidents.

All these aspects and analysis indicate that if BJP conducts early elections in Gujarat, it will add up to its advantage.