One of the two terrorists, Naveed Babu, is no ordinary militant. He is second after Riyaz Naikoo, the face of terror in Shopian. Naveed Babu is behind the killings of over a dozen policemen. His latest deadly acts included the killing of non-resident truck drivers and fruit farmers following the Centre's move to abrogate Article 370. 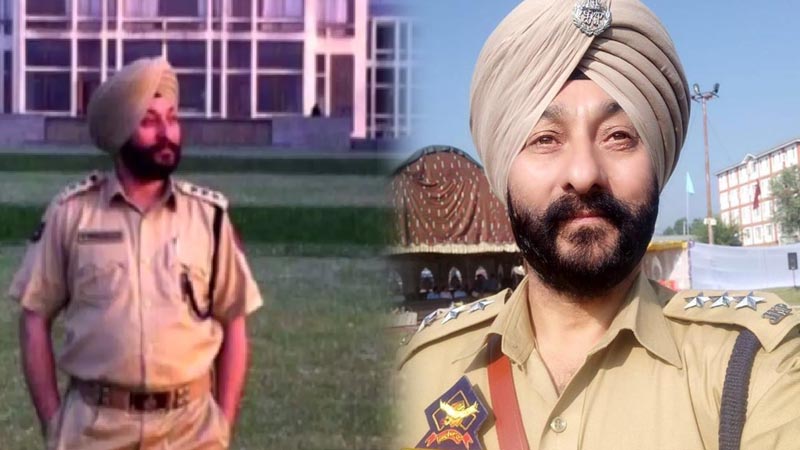 One of the two terrorists, Naveed Babu, is no ordinary militant. He is second after Riyaz Naikoo, the face of terror in Shopian. Naveed Babu is behind the killings of over a dozen policemen. His latest deadly acts included the killing of non-resident truck drivers and fruit farmers following the Centre's move to abrogate Article 370.

In a carefully planned operation, the car was intercepted by DIG Atul Goel, an officer who spent years in National Investigation Agency (NIA), before returning to his JKP cadre. Davinder Singh, a decorated officer, was posted in the anti-hijacking unit of Srinagar airport before his arrest.

57-year-old Davinder Singh had been on the police's surveillence for several weeks. Police team under Shopian SP Sandeep Chaudhary was first to intercept a call after which he quickly informed his senior officers.

The officer had gone to Shopian to bring Naveed Babu to Srinagar and was helping the two Hizbul terrorists to escape to Jammu. Intelligence sources said, "The real motive was to help Naveed and his aide to move out of Kashmir to Pakistan." Sources also said that the other Hizbul terrorist Rafi had expertise in arranging and ferrying people to Pakistan.

Sources said Rafi, who is also a lawyer, would make arrangements to pass through with proper paperwork. Probe is on to check if documents were also forged for this.

Sources said a sum of Rs 12 lakh may have been given to Davinder Singh for the job and when caught he seemed to be quite comfortable in the company of Naveed, branded as a cop killer.

On Saturday morning, as the car left his Srinagar home, Davinder Singh moved very fast. The accused were apprehended before Jawahar tunnel as cops feared that it would have been extremely difficult to track the car once the tunnel connecting to Jammu was crossed. The men may have just disappeared.

The police have recovered 5 grenades and 3 AK-47 rifles during a search at DSP Davinder Singh's Indiranagar residence in Srinagar.

TOP COP WHO THREW IT ALL AWAY

According to officials, money must have been the only motive for Davinder Singh to help the militants. "Suspicion is that Davinder Singh may have helped terrorists earlier as well. Cops are carefully scanning CCTV footage at the airport too," the officials said.

A resident of Ovarigund Tral in south Kashmir's Pulwama, Davinder joined as a sub-inspector sometime in 1990. Davinder Singh had just completed graduation from Amar Singh College in Srinagar when he found himself donning the khaki uniform.

Davinder Singh has been involved in several controversies in his career but was lucky to get away each time. The red flags were there but deliberately ignored by a force fighting peak militancy.

Officials said, "It is Davinder Singh's track record in counter-terror operation, which got him immunity. Several inquiries followed no action." A CRPF officer recalls how DSP Davinder Singh had bravely fought in an encounter in North Kashmir's Sopore area in the late 1990s.

During his 10-year stint in the Special Operations Group (SOG) in the 1990s, Singh's performance won him both envy and laurels. For his role, Davinder Singh was given an out-of-turn promotion and made inspector in the late 90s. In one such operation, Singh was injured in the leg in Budgam.

In an inquiry early in his career, Davinder Singh was found to have sold illegal "contraband", a form of charas from a drug peddler after nabbing him. There were allegations of extortion as well. Another incident which raised eyebrows was when he carjacked a truck full of timber and the truck was owned by a relative of former Chief Minister Ghulam Mohideen Shah.

But his first terror link perhaps emerged when Afzal Guru, in one of his letters he wrote to his lawyer alleging that Davinder Singh had tasked him to take a terrorist to Delhi and arrange for his accommodation there. The Jaish-e-Mohammed terrorist Afzal Guru had to accommodate was one those who were killed during the attack on Parliament.

Davinder Singh was never questioned even after Afzal Guru's letter named him. Afzal Guru was hanged in 2013 for his role in the Parliament terror attack.

After serving in the Special Operations Group (SOG), Davinder Singh was transferred to the traffic police. A decorated officer, he was also part of a UN peacekeeping mission in Kosovo in 2003 for a year. He was awarded the President's Police Medal for Meritorious Services last year. A senior officer said, "JK Police is a professional force, he will be dealt with as a terrorist."

Davinder Singh has two properties in Srinagar and one in Jammu. Belonging to Tral, his family owns an orchard and his aging parents live with his brother in Delhi. Davinder's wife is a teacher and the couple has three children, two daughters who are studying MBBS in Bangladesh and a school-going son.

Nearing his retirement, luck seems to have finally run out for the accused DSP. A senior police officer said, "There is no getting away from this unpardonable mistake of being a traitor."

Davinder Singh took the plea that he was taking terror operatives to surrender but interrogators have found the claim to be false. Singh's last public appearance was with the foreign envoys who visited Kashmir Valley this month. Donned in khakhi, the turbaned Sikh officer is seen smiling in a picture with the envoys. As multiple agencies now probe the officer for terror links, his career has ended from "decorated" to "disgraced".