In the controversy over Sidhu Moosewala's SYL, boxer Vijender Singh has made a big statement and supported the lyrics of Sidhu's song. 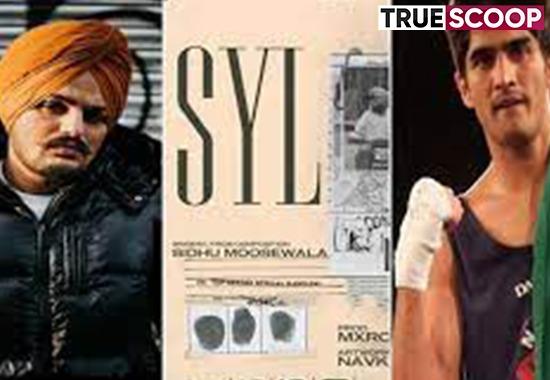 The songs of late Punjab singer Sidhu Moosewala have often been in controversy. Now released after the death of Sidhu Moosewala, his song SYL has also come under discussion. In this song, Sidhu Moosewala has highlighted the Sutlej-Yamuna issue in Punjab and Haryana, to which various celebrities have given their reactions. Over Sidhu Moosewala's new song SYL, boxer Vijender Singh has made a big statement and supported the lyrics of Sidhu's song. 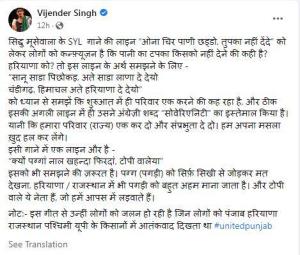 In the post he wrote, "People are confused about Sidhu Moosewala's SYL song line "Ona chir pani chaddo, tupka nahi deede" as to whom not to give water drop?
To Haryana? So to understand the meaning of this line - "Sanu sada pichokad, ate sada laana de deyo
Chandigarh, Himachal ate Haryana de deyo"
Understand carefully that in the beginning, the family is asking to unite, and right next line he used the English word "sovereignty". That means unite our family (state) and give sovereignty. We will solve our own issue.
There is another line in this song -
"Kyu pagga nal khehnda firda, topi varelya"
This also needs to be understood. Don't look at turban by connecting it with Sikhism, turban is also considered very important in Haryana / Rajasthan. And these are the leaders with caps, who make us fight among ourselves.
Note :- In this song only those people are getting jealous who see terrorism in the farmers of Punjab Haryana Rajasthan Western UP #unitedpunjab"
Also read:  Punjab Vidhan Sabha: Tribute paid to Punjabi singer Sidhu Moosewala on the first of Budget session

Haryana boxer and Congress leader Vijender Singh has supported the song. It is written on Vijender Singh's Facebook post that Moosewala has not said anything wrong. Vijender wrote in his post that the real meaning of Sidhu's songs should be understood. In the song, there is talk of uniting the family Punjab, Himachal and Haryana. He said that in this song only those people are getting jealous who see terrorism in the farmers of Punjab, Haryana, Rajasthan and UP.