Ankita Lokhande organised a party in Mumbai for her girl pals. The event was joined by Rashami Desai, Mrunal Thakur, Shristy Rode, Mahhi Vij among others. 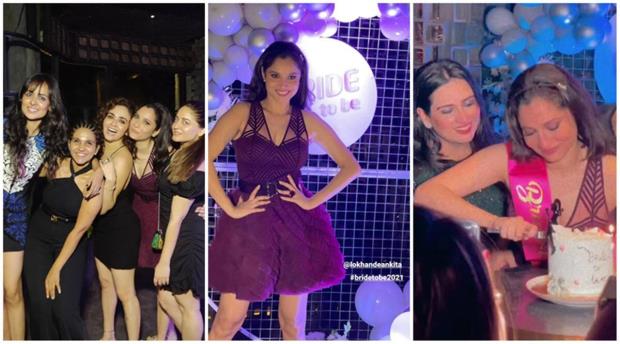 Ankita Lokhande is set to tie the knot with her boyfriend Vicky Jain next month. She kicked off the celebrations with a bachelorette party on Tuesday, attended by several of her industry colleagues, including Rashami Desai, Mrunal Thakur, Srishty Rode, Mahhi Vij, Aparna Dixit, and others.

Several pictures and videos from Ankita’s bachelorette party were shared online. She wore a wine-colored dress as she cut a white cake with the words ‘bride-to-be’ written on it, while Din Shagna Da played in the background. She was also seen wearing a pink sash in several images.

One video showed Ankita singing along and dancing as the song Main Sasural Nahi Jaungi came on but she gave a disclaimer: “Nahi, Abhi Jaana hai (No, but I want to go now).” Other clips showed Rashami, Mahhi and others grooving to songs Ankita Lokhande's smile steals hearts, the Pavitra Rishta actress glows like never before as she is all set to cut her delicious-looking customized cake. The bride-to-be kept her look very simple and enchanted our hearts.

Ankita and Vicky celebrated their third anniversary earlier this year. In an Instagram post shared in June, she called him the ‘best boyfriend in the world’ and thanked him for staying by her side at all times. She also said that she was sceptical about finding love again because of her past heartbreaks but he made her a ‘believer’.

Ankita and Vicky’s wedding is going to be a three-day affair that will commence on December 12 and will end by December 14. For their big day, the couple has zeroed down on a 5-star venue in Mumbai. Ankita has been giving glimpses of her wedding preparations to her fans through her Instagram account. Earlier on November 10, she shared images of her embroidered ‘Bride-to-be’ sandals.