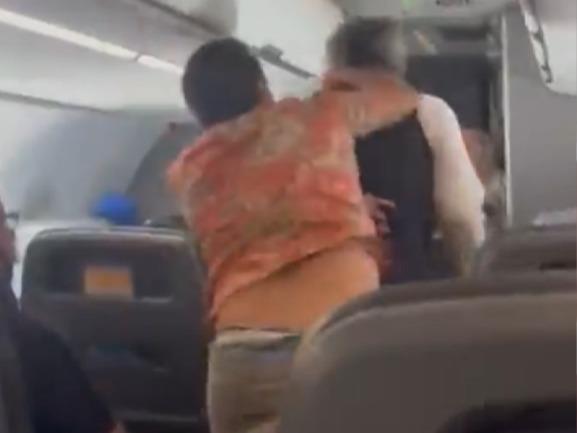 Violence in the air: a friend was travelling from Cabo to LAX, when a passenger hit a flight attendant for not letting use him the first class bathroom. He was later restrained by other passengers and arrested upon touchdown. The video shot was by Barrie Livingstone pic.twitter.com/PntVqWyWs9

Florida: Manatee County teacher yells at Latino student for not standing up for Pledge of Allegiance; Video Viral

As per a US media report, the man's name is Alexander Tung Chu Le who is 34 years of age hailing from Westminster, Calif was charged on Thursday with one count of interference with flight cabin crew members. As per US State Justice Department, Le was arrested and if found gultiy he can face up to 20 years in prison. FBI inits statement further revealed that the man was arrested after the plane landed in Los Angeles, and he was taken off the plane. The incident occurred on American Airline Flight 377 from San Jose del Cabo, Mexico, to Los Angeles International Airport on Wednesday.

In the American Airlines passenger flight attendant fight case, the president of the Association of Professional Flight Attendants,Julie Hedrick, the union representing American's cabin crews, stated that the passenger had exhibited "dangerous, life-threatening behaviour." Furthermore, Julie Hedrick added "Thankfully, the crew and passengers subdued the passenger, and the flight landed safely. Airline spokesman Curtis Blessing also issued a statement saying, "This violent behaviour puts the safety of all passengers and crew in jeopardy and must stop."