Downpours in British Columbia this week caught motorists in mudslides, killing at least one person and leaving four others missing, forcing thousands of others to abandon their homes, and cutting off Vancouver and its port, according to officials. 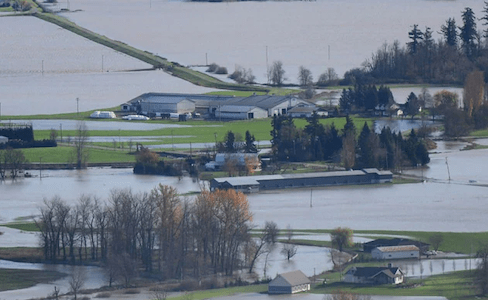 After record rainfall on the Pacific coast caused a state of emergency on Wednesday, Canada is sending the military to aid evacuate and support communities hit by "catastrophic" floods, with the death toll anticipated to grow.

Also Read: Canada sees increasing daily Covid-19 cases in past days
Downpours in British Columbia this week caught motorists in mudslides, killing at least one person and leaving four others missing, forcing thousands of others to abandon their homes, and cutting off Vancouver and its port, according to officials.
Also Read: 3-member NIA team in Canada to probe funding routes of pro-Khalistan groups

After a "atmospheric river" dumped the region's monthly rainfall average in 24 hours, some 18,000 residents have yet to return to their homes. An "atmospheric river" is a lengthy strip of moisture in the air that transfers water from tropical areas to the poles.
Nearly 7,000 properties were still under mandatory evacuation orders as of Thursday, with over 2,500 more under evacuation advise.
After the storm swept across one of Canada's most agriculturally intensive areas, thousands of farm animals died and many more remain trapped by flood waters.
In Washington, ahead of a meeting with his US and Mexican colleagues, Canadian Prime Minister Justin Trudeau said the severe rains created "historical and horrific flooding" that "has disturbed the lives and taken the lives of people across BC."
"I can confirm that hundreds of personnel of the Canadian Armed Forces are currently en route to British Columbia to assist with everything from supplies to evacuation and whatever else is required," he added.
Premier John Horgan of British Columbia declared a state of emergency and issued a travel ban, telling reporters that "catastrophic" rains, winds, and flooding had "devastated entire communities across our province."
"In the next days, we expect to confirm even more fatalities," he continued.
The harsh weather this week follows record-breaking summer heat in British Columbia, which killed over 500 people and devastated a community, as well as wildfires that destroyed a town.

Airlifted to safety
The severe rains had stopped by Tuesday afternoon. A total of 300 motorists have been evacuated to safety after being trapped on highways due to mudslides, and a few evacuation orders have been removed.
"We're not out of this yet," said Henry Braun, mayor of hard-hit Abbotsford, east of Vancouver, at a press conference.
"We're in deep doo doo if we have another weather event like we just had," he warned.
Meanwhile, a woman's body was retrieved from a mudslide near Lillooet, 250 kilometres (155 miles) northeast of Vancouver, prompting fresh searches for other victims.
Kathie Rennie, a motorist, told the Canadian Broadcasting Corporation that she saw "the entire side of the mountain tumbling down and taking out these automobiles... everything just getting swept away." "I'm in total panic."
"We have received a fourth missing person complaint relating to the Lillooet mudslide," Staff Sergeant Janelle Shoihet told AFP late Wednesday.
Residents struggled for food, heat, and water as the season's first snow flurries fell over inland villages buried in muck and partially flooded.
As a result of supply chain interruptions, many grocery shop shelves were empty.
"You don't need 48 eggs," Horgan said, urging residents not to overstock. A dozen will enough, and the remainder can be saved for others.
On the suburbs of Vancouver, cows were dragged through a metre of water to higher ground from hundreds of flooded farms on the Sumas Prairie, including a cow towed behind a jet ski through a metre of water.
"Thousands of animals have died," British Columbia Agriculture Minister Lana Popham said, adding that many more are in "terrible situations."
Almost 200 individuals were airlifted to safety from the region overnight.

Vancouver cut off
A number of major highways are still closed. As a result, motorists travelling to or from Vancouver must go south into the United States before returning north into Canada.
Rail traffic to and from Vancouver, one of Canada's major freight sea ports, was also disrupted by landslides.
"We're working hard to assess the damage and ensure that those supply roads are back in working order as soon as possible," Horgan added. "However, the situation are terrible."