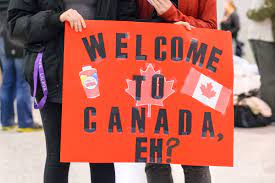 Former Prime Minister Brian Mulroney, who is remembered for tripling immigration during his term, has urged Canadian people to grow Canada’s population to 100 million to support country’s economy. Supporting his statement, the former Prime Minister gave a message to Canadians, “we need more people…a lot more.”

Mulroney spoke at a forum hosted by the Globe and Mail and Century Initiative which is a think tank planning for Canada’s future prosperity. There, the prime minister floated ideas to accelerate Canada’s growth that was already on Century Initiative’s agenda.

With a decline in the birth rate, Canada can't replenish the population on its own. A low birth rate along with an aging workforce will not do without immigration. Such factors would put financial pressure on the working-age population, and effects of the same would be felt this decade as 9 million baby boomers will reach the retirement age. Thus, to counter these demographic challenges, Canada has to consider the high level of immigration.

In the year 2019, 80 percent of Canada’s population growth was due to immigration, and this year Canada is willing to welcome 1.2 million immigrants between 2021 and 2023. The Century Initiative reports says more needs to be done, “this business-as-usual approach to population growth will not create the economically vibrant, socially generous future Canadians want and expect,”

Century Initiative paints a picture of the world in 2100 where the global population has grown to 11.2 billion. The U.S. is among the top fastest-growing countries with a population of around 450 million. Whereas, Canada’s population is 49.7 million and the fertility rate is still low and the immigration level has not changed. This Canadian population is old and economic growth falls to half of what it has been over the past 50 years.

But with an increased rate of immigration, an alternate picture of Canada can be anticipated. Canada would have 100 million people, which is the 27th largest population in the world. The economy is growing faster and Canada would have a younger population which means a larger labor pool and taxpayer base. More the taxpayer base more will be the money that can be used in social programs and infrastructure.

Century Initiative suggests Canada should pin the annual immigration target to 1.25 % of its population per year, by 2026 which could add up to 500,000 new immigrants in 2026.

Get the latest update about True Scoop News, check out more about Policies, Canada study visa, Schools & 000 new immigrants in 2021