Contrary to several reports on the matter reported earlier SSP clarified that until now no such video of other student have come to the notice of our investigating team Author : Tushar Singh 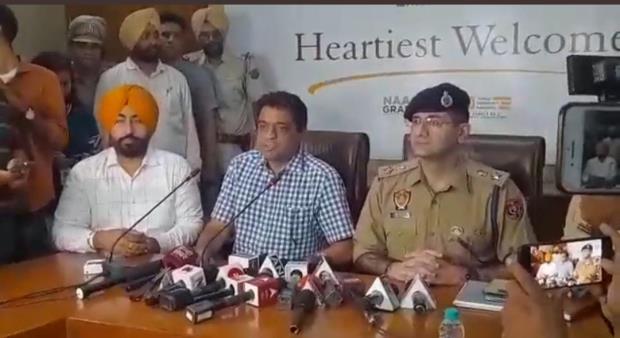 DC and SSP Mohali in a joint press conference on the Chandigarh University video leak incident have denied all the claims of any suicidal attempts inside the campus and have confirmed that no deaths have been reported as claimed through one of the videos where a girl is being carried by several others to the ambulance.

Mohali DC Amit Talwar IAS in the opening remark made a clear mention that no death has been reported nor any suicidal attempts have been made on the backdrop of the event and said that few girls have fainted due to anxiety over the case and were given all the required medical assistance.

Regarding the video leak case through which the events unfolded DC said, that Police have lodged FIR against the accused in the relevant section and have appealed to people through the press not to share or forward any information or video associated with the case as it will only create panic only.

“A free and fair investigation will follow into the investigation after which we will reach a consensus of what actually led to the incident meanwhile I request people to not hype up the matter on social media until any conclusive evidence is received,” Mohali DC added further.

SSP Mohali Vivek Soni who was also present at the press conference also emphasized the tune of what DC said about the denial of suicidal attempts.

Contrary to several reports on the matter reported earlier SSP clarified that until now no such video of other student have come to the notice of our investigating team the video that is associated with the matter is only linked to the student who has been arrested.

On the question of the FIR, SSP said, the preliminary investigation has been initiated after the report came to our notice about the incident. “We are saying about the development on the matter that no video of any other student has been leaked is based on the investigation we have conducted so far in this regard, we have not found videos of any other in the phone of the prime accused nor we have found the involvement of any other girl in the case.”

On the question of wide protest that followed upon the outbreak of the news, SSP said, “The visuals coming from the University of Wide protest late at the night is a development based on the rumor that was spread about the possible leak of the personal videos of other girls as well.”

The conclusive points of the detailed investigation are due from the police. What comes out of the forensic report through the seized electronic items of the prime accused will also be a point to look for in the due passage of time.

Through the press meeting, DC and SSP of Mohali urged people to kindly not speculate anything based on the media reports and asked the journalists present to not report anything that would harm or challenge the modesty of all those involved.