The lifting of Covid-19 restrictions and opening of public places like hotels, restaurants, pubs, bar and discotheques in Chandigarh has made the residents careless. 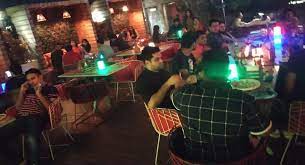 In the past, the UT administration was comparatively successful in reducing the effect of corona infection by strictly implementing the Covid-19 restrictions and saves hundreds of lives but with the opening up of public places, particularly pubs, bars, and other night-life adventure places have started inviting epidemic where all the Covid-19 restrictions are being violated with impunity.

A case has been registered against the police claimed to have arrest one person in this context. Notably, during the outbreak of Corona, restrictions were imposed by Chandigarh DC Mandeep Singh Brar, which has now been removed with some conditions. The new guidelines of the administration allow the opening of public places with restricted numbers of persons

According to the rules, serving hookah in discotheque-bars and clubs is prohibited. But there are DJ parties happening in late night with high volume.

On Saturday night in Sector-9's Nikbaker was opening till late night, flouting the DC’s orders after which a team of Sector-3 police station reached the spot and registered a case under section 188 against its manager. During a visit to Manimajra’s Nescafe Common Room club, this correspondent found hookah was being served openly. There was a hookah party going on in the club with over 50 people were smoking hookah.

During this, SDM East Ruchi Singh raided with the team and caught people smoking hookah. About 30 hookahs were also recovered by the SDM staff from the spot.

Likewise, a party was being held in the lounge and bar named Mafioso inside the Piccadilly hotel where hookah was being served. SDM Rupesh Kumar raided with his team and recovered 7 hookahs. The officer orders to seal the lounge for 3 days.

Apart from this, Sector-34 police station had also arrested the owner of the club by registering a case against him. Talking about the last two months, different police stations of the city have so far taken action against more than 30 clubs but the business has been going on unabated.