Channi hits back at Kejriwal, says ‘No model other than Channi Model can ensure holistic growth of Punjab 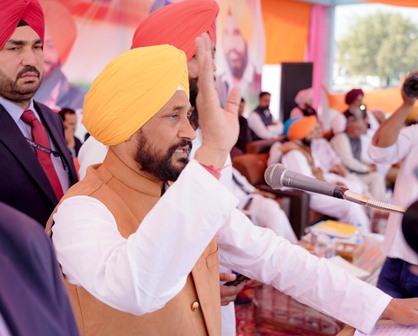 The Chief Minister said that this model does not allow any one person or family to plunder the resources of state. However, he said that Channi model is based on giving equal access to all for resources and opportunities in the state. CM Channi asked the people to support this model so that pristine glory of the state can be restored again.

Training his guns against AAP supremo, the Chief Minister said that the Delhi Model of Arvind Kejriwal is nothing more than a ‘bundle of lies’. He said that the Punjab governing has already taken several path breaking initiatives to benefit the masses whereas Kejriwal and his company are just making promises for them. CM Channi said that I can never be duplicate Kejriwal as I can’t be treacherous and cunning as he is.

Quipping on those who question about the financial condition of state, the Chief Minister said that state government is committed for well being of state and its people adding that there is no dearth of funds for it. He said that these funds are of the people and will be utilised for people by the government of the people. CM Channi said that he is plugging the loopholes in functioning of government and the money currently being usurped by the middlemen will be used judiciously for well being of general public.

Recalling his long association with the Aggarwal community, the Chief Minister said that his childhood friend also hails from the same community. He hailed the community as the most patriotic community in the country. CM Channi also lauded role of community in social economic growth of the country as well as the state.

The Chief Minister said that his government had already scrapped 40,000 pending cases of VAT, out of total 48,000 cases related to Financial Year 2014-15, 2015-16 and 2016-17, against traders and industrialists across the state. He said that, likewise, several other initiatives have been taken to safeguard interests of the traders. CM Channi also announced to constitute Traders welfare board (Wapaar Kalyan board) in the state.

In his address, MLA Dr Harjot Kamal said that enthusiasm is being witnessed amongst the masses ever since CM Channi has assumed the charge of office. He thanked CM Channi for sparing his valuable time to unveil the statue of Maharaja Agarsen ji here today. Dr Kamal also lauded CM Channi for taking several pro-people initiatives for well being of people.