The Chine sheep circle walking surveillance footage of the strange activity depicts a huge flock moving in a clockwise pattern as a group and without direction, forming a perfect circle in the centre. 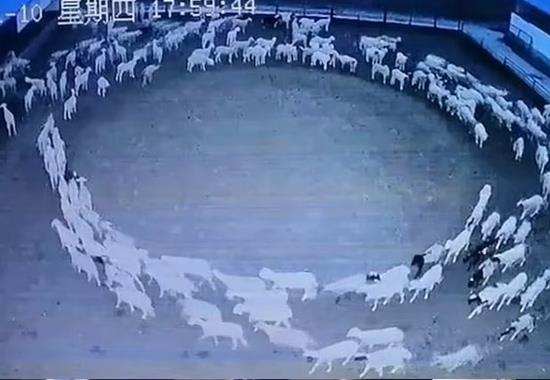 In a strange event, a massive flock of sheep are walking in a circle for the past 12 days in northern China’s Inner Mongolia region. China Sheep circle walking videos have been sending shockwaves around the world. Not only this, netizens are curious to know the reason behind China sheep circle walking. In fact, many are calling China sheep walking as 'death circle' and coming out with their own theory.

As per a Chinese media report, the sheep are completely healthy, and the cause of the strange situation is unknown. Furthermore, Ms Miao, the sheep owner was quoted by the Chinese media claiming the spectacle began with a few sheep until the entire herd joined in. The Chine sheep circle walking surveillance footage of the strange activity depicts a huge flock moving in a clockwise pattern as a group and without direction, forming a perfect circle in the centre.

In the China sheep circle walking CCTV footage, lots of sheep can be seen chasing each other around in a circle. On November 4, the mystery films were shot in the Inner Mongolian city of Baotou. Reportedly, the farm had 34 sheep pens, however only the sheep in pen 13 moved throughout the circling exhibit. A few reports suggest that the sheep’s behaviour is caused by Listeriosis, a bacterial ailment often known as 'circling disease.' Listeriosis can cause one side of the brain to become inflamed, causing the sheep to behave strangely.

On Listeriosis, Australian media says, "Initially, affected animals are anorectic, depressed, and disoriented. They may propel themselves into corners, lean against stationary objects, or circle toward the affected side." Outbreaks are often caused by rotten or low-quality fodder. In sheep and goats, however, death generally occurs within 24-48 hours of the onset of symptoms.

However, China Circle sheep walking has caused panic among netizens and many are calling it a death circle.

The great sheep mystery! Hundreds of sheep walk in a circle for over 10 days in N China's Inner Mongolia. The sheep are healthy and the reason for the weird behavior is still a mystery.

A user wrote, "Ants do this too. But probably for different reasons."

The Sedgwick County Zoo: Mother chimpanzee emotionally hugs new-born after it comes out of oxygen support

Ants do this too. But probably for different reasons. https://t.co/SDA0YtmNEL

"The message is clear, the animals are tired of the abuse of the humanity," wrote another user.