CM Bhagwant Mann presses for Bharat Ratna to Bhagat Singh, appeals Punjabis to come together to make the state No 1

Speaking at the occasion he congratulated the people of Punjab for the efforts and commitments of Bhagat Singh that earned us the much-needed freedom for which our ancestors fought for over a century Author : Tushar Singh 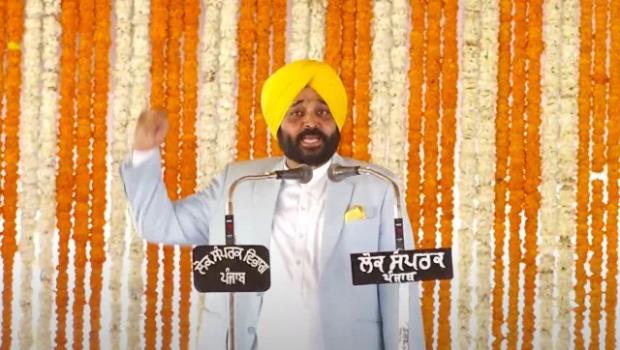 Speaking at the occasion he congratulated the people of Punjab for the efforts and commitments of Bhagat Singh that earned us the much-needed freedom for which our ancestors fought for over a century.

He went on to say that prestigious recognitions like Bharat Ratna must be conferred upon people like Bhagat Singh for their sacrifice. While speaking at the event Mann lashed out at Congress while saying Pandit Nehru and Indira Gandhi themselves recommended conferring Bharat Ratna on Bhagat Singh.

He went on to say that those who sacrificed their lives for freedom truly deserve these recognitions, he said doing this will only increase the reputation of these awards.

He said that before now the statue was cleaned for only one day, but now people will always keep Bhagat Singh in their hearts. Speaking on the occasion he narrated a story of Bhagat Singh’s marriage saying, “When he was insisted on getting married, he said that he was made for the country and her motherland is her lover,” expressing his emotion with poetry.

Ludhiana shocker: Father kept raping his daughters under the influence of alcohol in humanity shaming incident; Details Inside

He went to speak on the occasion and made an appeal through the forum to all the Punjabis of the world to come forward with an aim to make Punjab number-1, which can ensure that youth can be given employment by setting up schools, colleges, hospitals, and industries in Punjab.

He said that the boards of ILETS are seen everywhere because the youth do not see their future bright in India, but now there is no need to go to the uninhabited houses.

Mann said that if Bhagat Singh and other martyrs had also shied away from responsibilities, then freedom would not have been achieved. Success has to be achieved by fighting.

In that spirit he appealed to people to play their part in making Punjab No.1. Towards the end he thanked the people and raised slogans of Inquilab Zindabad and Bole So Nihal, appealing to them to stay safe.