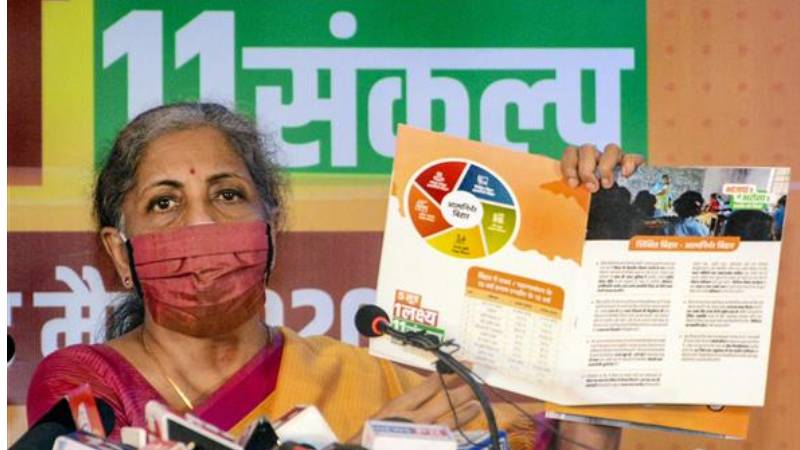 Since the campaign for Bihar Election has started heated questions and answers have been doing rounds. The BJP has been seeing as a pro-active party which is taking a quite serious interest in the Bihar Elections. BJP star campaigners all are present their views and promises for the people of Bihar.

Launching the BJP's manifesto, Sitharaman said, "As soon as the COVID19 vaccine will be available for production at a mass scale, every person in Bihar will get free vaccination. This is the first promise mentioned in our poll manifesto."

"As and when the vaccine candidates that are currently under various levels of trials in the country get scientific clearances and a go-ahead for production, the people of Bihar will get vaccination for free once the production in India is on a large scale. This is our first poll promise as mentioned in the manifesto," added Sitharaman.

However, this promise by BJP soon backfired them as people started to slam the national party for doing 'vaccine politics'.

An activist went to file a complaint against the BJP to the Election Commission of India. Saket Gokhale took to Twitter and informed about this. he wrote, "Filed an urgent complaint with ECI regarding BJP's announcement of free Covid-19 vaccine for Bihar by Union Finance Minister @nsitharaman. This is not only discriminatory but also a false promise & blatant misuse of Central Govt. powers during elections."

After a complaint was filed and people started to slam the BJP for doing vaccine politics, BJP IT Cell head Amit Malviya gave his clarification. He wrote, "BJP’s manifesto promises free Covid vaccine. Like all programs, center will provide vaccines to states at a nominal rate. It is for the state Govts to decide if they want to give it free or otherwise. Health being a state subject, Bihar BJP has decided to give it free. Simple."

Also Read: 'Netflix series Bad Boy Billionaires on Sahara is ill-researched and away from facts'

On this Saket replied, "This is an absolute garbage “clarification”. What’s the basis of this “Centre will provide vaccine at nominal rates to states”? Has the Union Govt announced its vaccine policy yet?  Or is India’s vaccine policy now formally being announced through the IT cell chief coolie?"