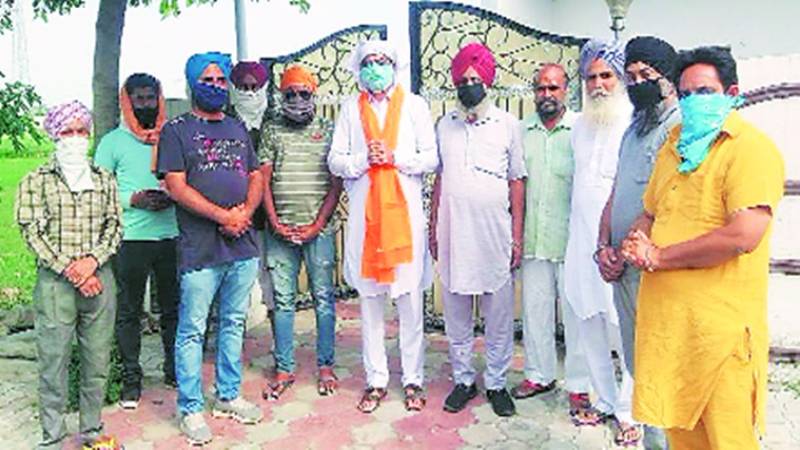 A coronavirus positive patient from Kishangarh village of Khanna has been booked by the district police for breaking home/self-isolation and also accepting honour by a group of villagers who presented him 'siropa' (orange-coloured cloth) and honoured him as a corona warrior.
The patient was sent home under the new discharge policy of the Ministry of Health and Family Welfare. He was one of the 19 patients who got infected in a chain of employees of Ludhiana-based tyre factory Hindustan Tyres and was admitted to Civil Hospital, Khanna.
The Khanna police have registered an FIR against the patient after the photos of him getting honoured by villagers went viral on social media and appeared in vernacular media on Thursday. He hasn’t tested negative but was sent home as per the new discharge policy as he was asymptomatic.
Dr Rajinder Gulati, senior medical officer (SMO), Khanna, told an eminent news agency that the 46-year-old patient was discharged on May 17 as per the new discharge policy. “We had also taken an undertaking from his family that he will not step out and will remain in home isolation for at least a week but still he did. He had already spent 10 days in Civil Hospital, Khanna, and was completely asymptomatic. He had not tested negative when discharged and hence was told to be in strict home isolation for at least a week,” Dr Gulati said.
Inspector Jaspal Singh, SHO of Sadar Khanna police station, said that after photos of him being honoured by villagers went viral and appeared in the local press, an FIR was registered against the patient.
Also Read: New discharge policy behind turnaround in recovery rate in Punjab, 3 districts become corona-free
“We got to know through photos that reached us via social media and local press, of him being honoured by villagers and given siropa. He was honoured for being a corona warrior. He stepped out of home and accepted all the honours. Local political leaders also came to honour him and he accepted them despite being asked to be in isolation by the doctors,” the SHO said.
An FIR against the patient has been registered under sections 188 (disobedience to the orders duly promulgated by public servant), 269 (negligent act likely to spread infection of disease dangerous to life) of the IPC and Section 51 of the Disaster Management Act.
“We have now taken a promise from him that he won’t step out of the home. The offences are bailable and he is yet to be arrested as he is still in home isolation,” the SHO said. While enquiring, the SHO asked about the reason for stepping out from the patient and “He said that he was completely okay and was discharged from hospital. So he thought it was fine to step out and accept honour from villagers who came to present him siropa.”
On contacting the patient, his son picked up the phone and said, “My father went out assuming that doctors have come to check him. He wasn’t aware that villagers had come to honour him. It was all very sudden. He did not do it intentionally.”
The incident has created new trouble for the employees of health and police department who are now busy in preparing a list of 20-25 people who came to honour the patient informed the SHO.
Coronavirus Punjab Covid 19 Khanna Corona Positive Patient Breaks Home Isolation Villagers Honoured Him Khanna Police Contact Tracing On Top Regional News English News True Scoop