Court Of Inquiry: CDS chopper crash was caused by pilot disorientation caused by change in weather 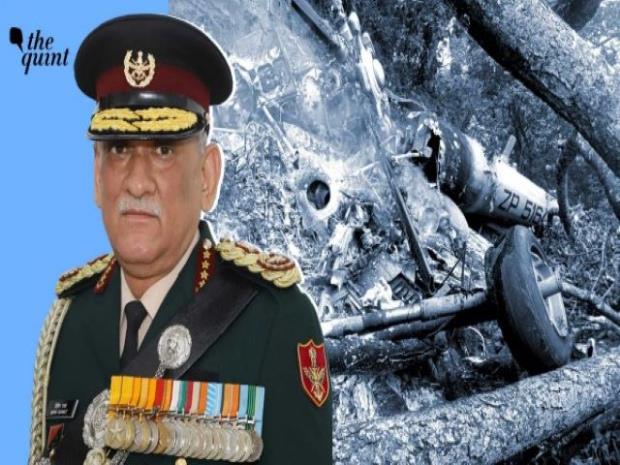 The crash of the Mi-17 V5 carrying India's first chief of military staff, General Bipin Rawat, on December 8, 2021, was caused by an abrupt shift in weather that confused the pilot, who then likely struck the aircraft at a surface, according to the tri-services Court of Inquiry.
On January 5, Air Force Chief Air Chief Marshal V K Chaudhari and the chairman of the investigative committee, Air Marshal Manvendra Singh, presented the findings to Defense Minister Rajnath Singh.
The Court of Inquiry had presented its preliminary findings on Friday, ruling out technical failure, sabotage, and carelessness, according to the Indian Air Force. "As a reason for the accident, the Court of Inquiry has ruled out technical failure, sabotage, or carelessness." According to the IAF, the crash was caused by "spatial disorientation of the pilot resulting in controlled flight into terrain or CFIT" owing to an unanticipated change in meteorological conditions in the valley.
CFIT is one of the leading causes of aviation accidents across the world. It occurs when an aircraft that is rated airworthy strikes a surface inadvertently owing to the pilot's confusion.
The Court of Inquiry issued several suggestions, according to the air force, "which are being considered."
Soon after the disaster, a tri-services investigation was launched, which included one-star commanders from the Navy and Army and was led by Manvendra Singh, the IAF's senior-most helicopter pilot. "To identify the most likely cause of the accident, the investigation team examined the Flight Data Recorder and Cockpit Voice Recorder, as well as interrogating all relevant witnesses," the IAF stated.
The helicopter was descending to land when it encountered unexpected clouds, causing the pilot to get disoriented.
Rawat, Madhulika Rawat, and 12 other military people were aboard the Mi-17 V5, including Rawat's senior staff members Brig LS Lidder and Lt Col Harjinder Singh, as well as IAF commanders Wing Commander Prithvi Singh Chauhan and Squadron Leader Kuldeep Singh. While 13 of the 14 passengers perished in the accident, Group Captain Varun Singh escaped but died a week later from his injuries.
The helicopter took off from the Sulur airfield at 11.48 a.m. on December 9 and was anticipated to arrive at Wellington by 12.15 p.m., according to Defense Minister Rajnath Singh. At 12:08 p.m., Air Traffic Control at the Sulur airfield lost communication with the chopper.
Also Read: Indian army to unveil their new uniform on Army Day 2022
According to Singh, local locals saw a fire in the forest near Coonoor, Tamil Nadu, and went to the scene, where they saw the wreckage of the helicopter engulfed in flames. Rawat was on his way to the Defense Services Staff College in Wellington, in the Nilgiris area, to give a lecture. His successor has yet to be named by the administration.