MLA Kesar Singh died due to coronavirus on April 28. After he expired, a video was telecasted on the media channels. In this video, BJP MLA Kesar Singh can be heard saying 'no' to mask and saying that covid-19 is over, where is a coronavirus.

Kesar Singh's condition deteriorated suddenly on April 10, he was admitted to Ram Murthy Medical College, Bareilly. After tested, his report came positive. His family alleges that Kesar Singh could not get an ICU bed for even 24 hours. Therefore, he was admitted to Noida's Real Hospital, and during the treatment, he died.

The MLA's son Vishal Gangwar also questioned the Yogi government and its management. He said that the UP government failed to treat its own MLA. Vishal had said that even after repeated calls to the Chief Minister's Office, no one was picking up the phone and no service or help was provided via CMO.

The MLA also wrote a letter to the Union Health Minister Dr. Harsh Vardhan, after getting infected with the virus on April 18. In the letter, he mentioned that is being treated at Shri Ram Murti Memorial Hospital in Bareilly. And doctors have recommended intensive plasma therapy. Therefore, through the letter, he requested the Union Health Minister to reserved a bed for him in the Max Hospital, New Delhi. But still, the MLA did not get a bed in the Hospital. He was forced to get admitted to the Real Hospital, Noida. 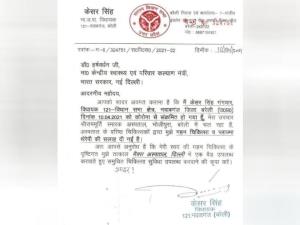 So far, three MLAs and two ministers have died due to the coronavirus. Before Kesar Singh, Suresh Srivastava, Lucknow's western assembly constituency MLA died after getting infected with novel coronavirus on April 23, and on the same day, BJP MLA Ramesh Diwakar died.

During the first wave of the virus Cabinet Minister Chetan Chauhan and Kamla Rani Varun died due to the virus.