Delhi Police has failed to make any arrests in the JNU violence case even two days after the attack. The violence has triggered protests across universities in the country 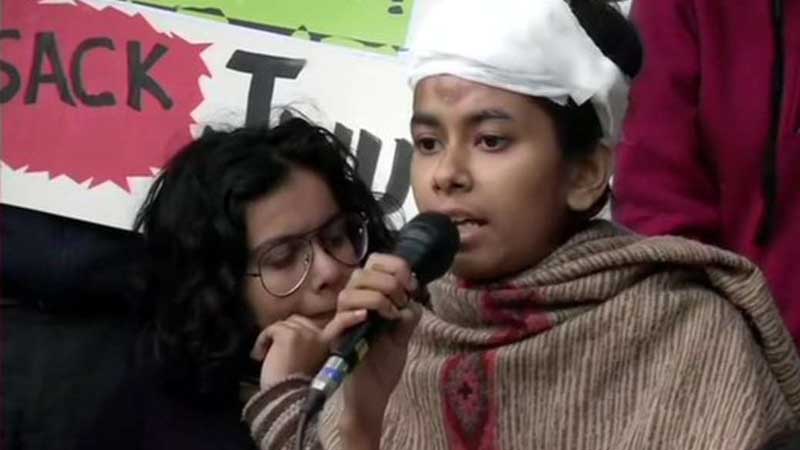 Delhi Police has registered an FIR against JNUSU president Aishe Ghosh and 19 others for attacking security guards and vandalising the server room a day before the Sunday violence on JNU campus.

The FIR has been filed based on a complaint filed by the JNU administration. The FIR was registered on January 5 and is among the three FIRs that Delhi Police have registered in connection with the JNU violence.

Delhi Police has failed to make any arrests in the JNU violence case even two days after the attack. The violence has triggered protests across universities in the country.

Aishe Ghosh and around 30 others were injured in the violence. The students and teachers were released from hospitals on Monday.

Aishe Ghosh on Monday said she was hit with multiple rods during Sunday's "organised" attack on the campus, but every iron rod used against students will be answered to by debate and discussion and the university's culture will never be eroded.

Also Read: Hindu Raksha Dal claims responsibility of attack in JNU says the university is hotbed of anti-nationals, our workers attacked them

JNUSU has demanded the resignation of Vice-Chancellor M Jagadesh Kumar, saying he had not bothered to meet or check upon the injured students and professors.

"For the past four-five days, some RSS-affiliated professors were promoting violence to break our movement (against hostel fee hike). Are we wrong to ask for safety from the JNU and Delhi Police," the JNUSU president asked on Monday.

Meanwhile, initial investigation by the Delhi Police has revealed that both JNUSU and ABVP workers were involved in the violence on Sunday.

The probe has found that outsiders were also brought inside the campus to spread violence.

Get the latest update about Vandalism, check out more about Delhi Police, True Scoop News, Reason of FIR Against Aishe Ghosh & JNU Violence