Chocolate, cream, masala and lemon on corn together. Video makes people ask ‘Why’ 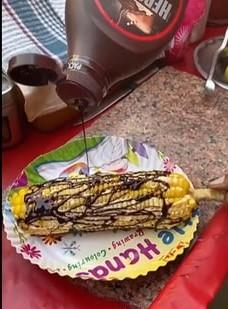 Sweet corn with a little butter, salt, oregano and a pinch of chili flakes is a treat for the taste buds. This tasty snack is not only filling but tasty also. But one street food vendor has managed to whip up an odd recipe involving sweet corn and it has highly irked netizens. Shared on Instagram by food vlogger Anikait Luthra, the cringey recipe is bound to leave you disgusted.

The video shows the vendor taking a steamed cob of corn and lathering it with butter. He then squeezes a generous amount of chocolate syrup and dollops of cream. It’s not over yet! The man tops off the corn with some masala and lemon juice. According to the caption, the street stall is located in East Delhi.

Disgusted? Join the club! The video has garnered over 33,000 likes and several comments from netizens. While some pointed out how the recipe massacred the natural taste of corn, others wrote that the video made them almost vomit.

Food blogger Anikait Luthra shared the video on Instagram. “Most weird Chocolate sweet corn?” he wrote while sharing the video.

The video was shared last month but it is making people comment till now. There were many who simply asked ‘Why’. Just like this individual who wrote “Lekin. Kiun?” Another Instagram user wrote, “Please. Stop.”