Deoghar Airport's inside photos do not disappoint the people as it shows how magnificent and grand the second international airport of Jharkhand has been constructed. 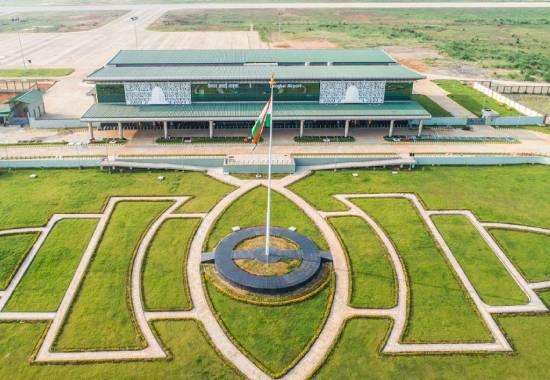 In only a span of almost 4 years, Jharkhand on Tuesday got its second international airport in its spiritual venue Deoghar. Deoghar Airport on Tuesday was unveiled by Prime Minister Narendra Modi who received a rousing welcome from the people of Jharkhand. Deoghar Airport was inaugurated at around 12:45 pm with PM Modi flagging off an Indigo flight from Deoghar to Kolkata airport. Now, with so much hype, people are keen to see Deoghar Airport inside pics. Deoghar Airport's inside photos do not disappoint the people as it shows how magnificent and grand the second international airport of Jharkhand has been constructed.
Deoghar Airport Inside Pics:
Also Read: IAS Pooja Singhal Case Updates: What is the secret of 'Diary', Her CA's connection; 'Alert' for Jharkhand Govt
Reportedly, Deoghar Airport is the 2nd airport in Jharkhand. 3 more airports (Jamshedpur, Bokaro, Dumka) will be operational soon in the state of Jharkhand. Notably, the foundation stone was laid in May 2018, and it has been constructed at an estimated cost of Rs 401 crore.
Having unveiled the Deoghar Airport, PM Modi in his address stated that it will make the lives of the people easy. "We had dreamt of Deoghar airport for a long time, it's being fulfilled now. These projects will make the lives of people easy", PM Modi said during his address. "The development projects worth Rs 16,800 crore will improve connectivity, tourism, and trade prospects of the state," he added.
Deoghar is a center of spiritualism in the State of Jharkhand. Temples like Baba Vishwanath (Lord Shiva) attract thousands of devotees and kawariyas go to the temple every year to offer their prayers. In fact, PM Modi also offered his prayers at the famous Baba Vishwanath temple in Deoghar on Tuesday.