Karan Johar and Dharma Productions has announced its first-ever action franchise film. Insiders tell us that this film will star Sidharth Malhotra. 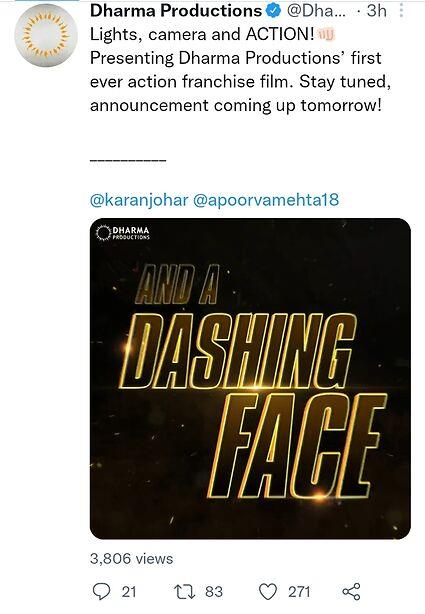 Karan Johar‘s Dharma Productions is on a roll. After working on the supernatural franchise Brahmastra, the filmmaker is all set to announce an action franchise. Taking to Instagram, KJo shared that his company is working on its ‘first-ever action franchise’. Posting a video, he teased fans about the upcoming project, which will star a ‘dashing face’ in the lead role.

The 39-second video opens with the words ‘A kick of drama, a punch of thrill’, followed by ‘A year of blood and sweat, a knockout story’.

Sidharth Malhotra is riding high on the success of Shershaah, co-starring his rumored girlfriend Kiara Advani, that released a couple of months ago on Amazon Prime Video. Naturally, it was a win for Karan Johar and his Dharma Productions as well, who had produced the project. Now, on November 17, Karan and Dharma Productions have announced another new project, this time their first-ever action franchise. And we hear that this too will be headlined by Sidharth Malhotra.

The video also reveals that the film is going to be the first of many in the franchise. As it asks the audience to stay tuned for the announcement that’s set to happen on Thursday, it adds that the movie will have a ‘dashing face’. The video ends with gunfire sounds hinting at an action-packed drama.“Dharma Productions is all set to announce their first-ever action franchise film! Stay tuned, big announcement coming up tomorrow!!!,” Karan Johar captioned the video.