The trailer for the most awaited movie ‘Radhe: Your Most Wanted Bhai’ is finally out. Along with the trailer the second poster for the film was also released today. Salman’s leading lady Disha Patani from the film can be seen shaking legs with the actor and their sizzling chemistry has left the audience impressed.

In the trailer Disha and Salman are seen sharing a kiss in a silhouette shot. Well, this particular shot has left netizens all amazed. The Dabangg actor’s fans are baffled over the scene that how has Salan broken his pact of ‘no kiss’ on screen. In that particular scene, the duo can be seen locking lips which has evoked the public and they are flooded with all sorts of questions and reactions. Many fans were seen indulging in a debate over the question whether Salman ended has ended his ‘no kiss’ on-screen policy after 30 years of his career with Disha Patani. Some are clarifying on the actor’s behalf that it is a camera trick and that the actress is wearing black tape on her lips. 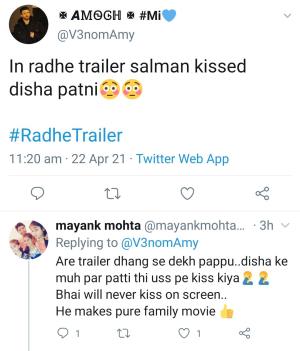 Whatsoever, the kissing scene controversy of the film has created so much interest among the audience that the movie which just launched its trailer is already trending the most on the internet. Whether the duo shared a kiss or not this controversy will definitely have a positive effect on the film publicity.

The movie is scheduled to release on May 13 2021 in a hybrid format that will be a theatrical release as well as a digital release. Under the direction of Prbhudeva the movie is produced by Salman Khan Films, Sohail Khan Productions , and Reel life Production Pvt. Ltd. Other leading cast members are Randeep Hooda and Jackie Shroff.