Don't Look Up trailer: Leonardo DiCaprio, Jennifer Lawrence raise the alarm but no one takes seriously

Don't Look Up's trailer has been released. Leonardo DiCaprio and Jennifer Lawrence star in the Netflix film, which also features Meryl Streep in a supporting role. 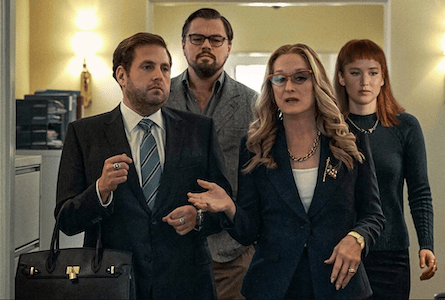 The first teaser for Netflix's upcoming satire Don't Look Up has been unveiled, and it's jam packed of new material from the film. Don't Look Up, starring Leonardo DiCaprio and Jennifer Lawrence, is about two astronauts who try to warn the public about a planet-killing comet approaching Earth, but no one believes them.
Also Read: Aamir Khan postpones Laal Singh Chaddha, will clash either with KGF 2 or release on Eid
Dr. Randall Mindy (Leonardo DiCaprio) and his student, Kate Dibiasky (Jennifer Lawrence), are trying everything they can to warn the world about the comet in the new teaser. They attempt everything in the book but fail, from knocking on the door of Orlean (Meryl Streep), the President of the United States, to appearing on morning television programmes and meeting Ariana Grande, to even trying their hand at spreading the word on the internet.
Also Read: Anubhav Sinha frames a Bollywood moment from Rajkummar-Patralekhaa wedding
When the government eventually listens to their warnings, they prefer to focus on finding methods to earn from the comet rather than saving the world. Randall and Kate are both arrested by the FBI at one point.
Mark Rylance, Ron Perlman, Timothée Chalamet, Ariana Grande, Scott Mescudi (aka Kid Cudi), Himesh Patel, Melanie Lynskey, Michael Chiklis, and Tomer Sisley star in Adam McKay's (The Big Short) written and directed film Don't Look Up.
Adam McKay told Deadline that he originally approached Jennifer about bringing in Jennifer and Meryl. "For her, I wrote the role of [astronomer] Kate Dibiasky." Without giving anything away, she took the most difficult path, which was just to tell the truth," he remarked.


"For Rob Morgan, I wrote Dr. Teddy Oglethorpe. I had already worked with him on the HBO Lakers series, and I adored him. So, there were a couple of folks I knew I wanted, and thank God, they understood what I was trying to accomplish and agreed to join me. Then, as every filmmaker dreams, you have the President in your film and must go to Meryl Streep. "I just never thought she'd say yes," he continued. "Once you get Meryl Streep, everyone else is more likely to be interested."
The film will be released on Netflix on December 24.